Prevention Magazine Grows a Digital Network
ComScore rates it 11th in its vertical. 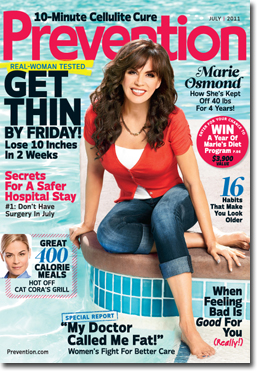 Prevention magazine
‘s new digital advertising network of niche health sites, dubbed the Healthy Living Group, is now in full swing since its May launch, with about 12 million monthly unique visiting the 35 sites in the network. The digital network is also now ranked 11th in the health category, according to comScore.

The network acts as a natural extension of the publication’s print and digital properties, enabling the title’s advertising partners to have an expanded reach.

"On the magazine side we’ve got an incredibly large audience," says Michael Kuntz, the associate publisher of Prevention, which is owned by Rodale. The publication has a circulation of about 2.8 million monthly readers and the total audience is 10 million. Prevention.com’s most recent three-month comScore average is 2.6 million unique visitors each month and 28 million page views.

"On the digital side of things, and I think this is a challenge most magazine Web sites grapple with-you get the audience to a point where you kind of plateau. Magazine Web sites are not like a news site, they’re not like a sports or finance site where someone is going there every single day," he says. "For us to really bring the kind of scale that our advertising partners on the digital side are looking for, we felt the best way to do that would be to find like-minded Prevention type users on other properties that we felt reflected who we are as a brand editorially."

The audience demographics for the network falls in line with that of the magazine-the goal is to reach women aged 35-54, though several of the sites target different interests of these women depending on the property. The Biggest Loser Club site would be targeted to someone trying to organize a weight-loss regiment while EmpowHER is more of a community site that evolves around health topics that effect all women.

Kuntz says the decision to create the network was not just a way to increase prospective and please current advertisers but to enhance content syndication. The other sites in the network will feature Prevention articles, videos and tools.

"We really want to create a more circular relationship with these sites," he says. "Not only are we syndicating our content but in some cases we’re ingesting content from our partners on Prevention, if you go to the homepage you’ll see headlines from EmpowHER.com."

Prevention editorial teams create a schedule of content every month that will be shared, it is sent to the network partners to be implemented on the satellite sites. Each site uploads different pieces and strategically places the content based on the editorial direction of the other 35 network sites. A third party vendor streamlines the process "seamlessly," as Kuntz says.

Features from the magazine, though not all stories, are shared across the sites. A great deal of the content on Prevention.com is created specifically for the Web platform to keep readers engaged with the print publication.

One strategy the magazine feels strongly about is trying to build advertising packages around content categories that are on the partner sites. For example, if it were October, which is breast cancer awareness month, the group would feature stories on the topic. At the same time, if an advertiser was trying to push a diabetes related product, network sites would also recieve diabetes related articles during October.

"It’s really a two-pronged approach of aligning the ads with the edit," he says.

Prevention represents the sites from an advertising standpoint since most are smaller nice sites that don’t have an internal sales force and rely on traditional ad networks.

Kuntz says the idea to expand into a Healthy Living Group digital network was considered for a bit beforehand but took shape when several of the sites approached the magazine to collaborate, he adds that it organically came to the fore as the demand from outside sites increased. There are no plans as of now to expand the network to the 16 international editions of Prevention.

"When we look at Healthy Living Group as a whole we’re breaking it out into all of the various channels, the same way if you go to the homepage of Prevention.com you’ll see health, weight-loss, nutrition and beauty," Kuntz says. Beauty has become a growing vertical for title, particularly age defying beauty.

"Sites want to work with us, they want to partner with Prevention and Rodale," he says. "They know we are really the authoritative voice in the health and wellness space."