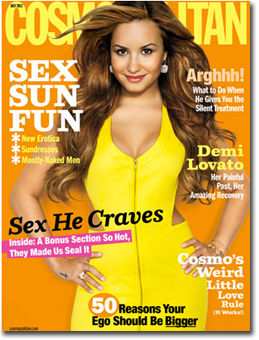 Hearst can’t catch a break. Shortly after the dust settled (more or less) around the Seventeen/Photoshop controversy, a new crusade against another female-centric title (Cosmopolitan) began. According to a press statement released this week, Victoria Hearst (granddaughter of Hearst Corp. founder William Randolph Hearst) partnered with Projectinspired.com founder Nicole Weider in an “Anti-Cosmo Mission.”

The Mission requests Cosmo not change its content, but “take responsibility for it,” according to Weider. The magazine already caught flack earlier this year after featuring two “underage” starlets (Selena Gomez, 19 and Dakota Fanning, now 18) on its February and March covers, alongside its typically racy headlines.

Now, Hearst joins Weider in her efforts to ensure Cosmo is only sold to adults 18 and above.

“About 11 years ago, I contacted Frank Bennack and the Board of the Hearst Corporation and told them that what they are publishing in Cosmopolitan magazine was pornographic. I had the support of two female psychologists and counselors who attest that this content hurts young girls. Like Nicole, I also asked that the magazine be sold only to adults 18 and older,” says Hearst in the statement. “I never received a reply from anyone at the Hearst Corporation, but I had peace because I delivered the message. When I heard about Nicole’s campaign, I knew I needed to join in her mission to put Cosmopolitan in a bag and make sure that its pornographic content cannot be sold to minors!”

A Change.org campaign (which garnered over 33,000 signatures so far) is going so far as to demand the magazine be sold in a non-transparent wrapper. Weider summarizes the goal of the campaign, “That no one under the age of 18 sees the cover of Cosmopolitan magazine on newsstands or at their grocery stores, and that no one under 18 can legally buy Cosmopolitan magazine.”

This is a tall order to ask of any magazine, as cover art is the only bait publishers have on the newsstand. And what about those over 18 who would like to preview the content of the magazine before they purchase it? If by some wild turn this campaign does go through (and I believe it won’t), it will certainly raise concerns about the rest of the industry.

If Cosmo is considered pornographic, what about the scantily clad bunnies on Playboy? The “hot sex” tips covering Men’s Health? The breast-feeding antics of TIME? Surely, if one controversial magazine is bagged, the rest will shortly have to follow suit—and for an industry already struggling with single copy sales, that would be one costly bag.