Popular Science Offers a Peek Behind the Apple, Google Subscription Plans
There are still more questions than answers, and marketing is the biggest. 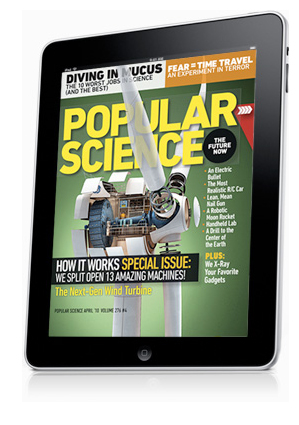 Popular Science has been at the front of the pack in terms of early adoption since the start of the apps race. Living up to its "the future is now" theme, Pop Sci was one of the first magazine brands to launch an iPad app 10 months ago, it was the first publisher to officially agree to Apple’s new digital subscription plan and yesterday was one of the first to sign up for Google One Pass, which allows readers to purchase magazine subscriptions across multiple devices.

To date, Pop Sci is generating between 10,000-12,000 iPad single copy downloads per month (the most of any Bonnier title), and its total digital sales (including Zinio copies) average around 33,000-34,000 per month, according to ABC’s Rapid Report.

FOLIO: spoke with Bonnier consumer marketing director Bob Cohn about what publishers can expect on the back-end from the Apple and Google subscription plans, and how Popular Science intends to grow its tablet readership. Cohn freely admits that he still has more questions than answers at this point (he called us from the offices of Palm Coast Data, where he’s currently trying to determine what back-end data tools Pop Sci needs moving forward), but offers a look at what publishers will be dealing with at this early stage.

FOLIO: You’ve been working with Apple for nearly a year now, but you’re one of the first magazine brands to agree to the new subscription plan. How will this change your approach?

Bob Cohn: It’s going to be a big change in priorities. What we were doing before was pretty much like a newsstand sale, like being on the rack and waiting for the customer to come find us. Other than doing PR, there wasn’t a lot of marketing one could do. Obviously, we can afford to invest more to get somebody to be a long-term customer than a single copy-customer and we’ll be doing more banners on our Web site and outbound e-mails. We still have an awful lot of learning to do in terms of promoting digital subscriptions.

We want to be on as many devices as we can logistically handle. In November we launched subscriptions on the Nook Color and we launched a one-shot on Samsung Galaxy. We’re hedging our bets–Apple right now has the largest market share in tablet usage. Six months from now, Android and the whole Google platform may grow or it may not, or Apple and Google may split the market up. What we want to do–and it’s been hard, especially with Apple since they haven’t been too transparent–is make this a front-end experience for the subscriber that’s device-agnostic. We want to engage the subscriber, get their name and address, put them in a database and then send out files to whatever device they prefer.

FOLIO: How do the Apple and Google subscription plans compare from a publisher’s perspective?

Cohn: The challenge with Apple is going to be how do you integrate publisher-sold subscriptions in the iTunes store. When somebody clicks on the "subscribe" button–believe me, it’s been out there for two days, I tried it myself–a non-descript window comes up that says ‘May we share your e-mail address with the publisher for their marketing purposes.’ If I was writing a promotion piece or direct mail piece I’d be much more proactive–‘You can get all these great extra emails and offers from us if you sign up here.’ We want to try something with premiums–give them a T-shirt or editorial premium but we’re not sure if we’re allowed to do that. We want to entice them to offer that information. It’s unclear whether Apple is going to allow that.

The Google system, from what we hear, sounds like it will allow us to control more of the front-end and be more like a traditional fulfillment process where somebody signs up for something and we take their credit card. From an operations point of view, that sounds like more familiar territory to us in terms of the way we market.

The big question is consumer adoption. Are consumers going to buy that tablet? The advantage of the Apple process is it’s seamless once you set up an Apple account on iTunes. It’s simple to order with one-touch. The disadvantage up until now has been that we didn’t have any information on that purchaser-we don’t know how many are repeats, how many are trying it once and not liking it. With Google, we’ll theoretically be able to obtain all that information. But if they don’t sell many units, it doesn’t matter.

FOLIO: Who has subscription liability–publisher or vendor?

Cohn: Apple charges it upfront to the consumer’s credit card and there are no cancellations, no refunds. Our accounting department is telling us we have to treat that as deferred subscription revenue, until it gets significant enough. Our goal is to use the existing deferred income subscription liability module that our fulfillment house has rather than reinvent the wheel, and keep records of subscriptions. We don’t worry about it in the short-term because there will be no refunds. In the print world, if somebody subscribes twice, we extend the subscription. In the iTunes store, it says ‘you already subscribed.’ We don’t know any of those answers for Google yet.

Cohn: There has been a lot of resentment in the magazine world about that 30 percent, but if it’s an Apple customer buying a lot of different things and they come through the Apple store to us, that’s fine, that’s typically what we do with other subscription agents.

It’s obviously better for us to keep 100 percent and we’re trying to figure out the rules and parameters of how we sell a subscription directly. If I do an e-mail tomorrow to my existing print subscribers, it’s my customer, it’s my existing list, it’s our promotion, but we’re not sure how to deploy that with Apple. There are no parameters to talk about how that works. Until we do, it will be difficult to do those types of promotions. That’s our goal, to use everything in our database to market this as effectively as possible.