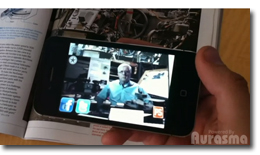 For its June issue, Bonnier’s Popular Science wanted to move past print constraints in its annual Invention Awards feature. Instead of integrating the more standard QR code to bring interactive content to its audience, PopSci tapped Aurasma “reality technology.”

“The difference between Aurasma’s technology and a QR code is that the QR code is used to activate a piece of Web content or a special offer; it typically drives you to a destination of some sort. In this case, Aurasma is combining the image with animation, so you have the sensation of picture coming to life in front of you,” says PopSci’s editor-in-chief Jake Ward.

Aurasma’s overlay (which is added over static images during the production process) leads users directly into video, etc. The magazine created an app called “PopSci Interactive” to house Aurasma’s technology through a provided STK; the app is available for both iOS and Android operating systems. Once a user accesses the additional content, they are able to double-tap the video and move the device away from the content’s print origin.

The Interactive app allows for screen shots of extra content for easy sharing through social media. Aurasma sends these engagement metrics, along with app download results and how many utilized the “Aura” technology, to PopSci each week.

“With magazine editing, there has always been a lack granular information: The kind you can get on the Web, but you can’t always get from magazines. This gives us the opportunity to see the number of people who turned to X page and activated this technology,” says Ward. “We’re going to look at those numbers, and see what other applications make sense for us.”

This is PopSci’s second venture into the augmented reality sector; an earlier version had readers utilize their Web cams to access extra content through the print mag. Ward explains that PopSci’s R & D department is tailored to support these types of initiatives, even if a new technology it is a considerable investment.

Even thought the issue is still fresh on newsstands, Ward anticipates more Aurasma usage in the future. “We feel it deepens the experience for the reader, while at the same time it creates value differentiation between platforms. It’s not just an equivalent thing, like, ‘see more pictures on the Web,’ but a new experience on a totally new platform,” he says.