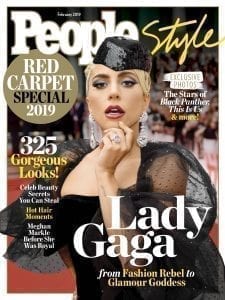 You up? It’s People.

Starting Sunday, People magazine says it will be offering free, exclusive Oscars red carpet and backstage content to users who text 212-479-1704 and sign up by providing their name and phone number. The project is part of a partnership with Community, a messaging platform that has attracted celebrities like Jennifer Lopez and Paul McCartney.

People says it’s the first media brand to sign on with Community, which launched last July and doesn’t carry any advertising. Instead, it’s monetized by its celebrities, called “Leaders,” who pay a fee to use the platform as a means of connecting with fans, although the exact nature of People‘s deal is unclear.

The magazine says it intends to continue its partnership with Community beyond the Oscars, providing users with news and insider content throughout the year, especially around other tentpole events and franchises, like “Sexiest Man Alive.”

In the age of TikTok and Alexa Skills, when digital strategy for mass-market media brands has essentially become an unending quest to meet smartphone users exactly where they are at exactly the right time, good old-fashioned SMS seems almost quaint. But People believes that texting offers several advantages.

For one, the onboarding process is quick, relatively easy and doesn’t require users to download an app—everybody texts. More importantly, however, texting is inherently interactive, as opposed to the one-way nature of push notifications or Apple News alerts. 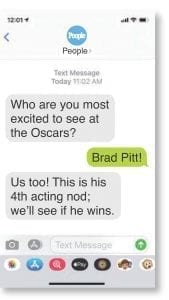 “It’s much more conversational,” People digital editor Zoe Ruderman tells Folio:. “The tone is different—it’s not hed, dek, click here for more—though of course there’s huge value in that sort of notification too. Texting is personal and chatty. It’s not just People sending out texts, but opening up the conversation to our community.”

Ruderman says her team will use the platform to foster two-way communication, such as soliciting interview questions for celebrities appearing on PeopleTV, or polling users on their favorite red carpet looks and creating an online gallery of the winners.

Now two years into a role that has her overseeing all editorial content across all of People‘s digital channels—from People.com to the brand’s massive social media platform and its OTT streaming network—Ruderman acknowledges that her team will be doing a lot of experimentation as the first media brand to join Community and will be paying close attention to the analytics.

“Texting is such a ubiquitous way of communication so it makes sense for us to start talking to our readers this way,” she adds. “There are so many ways that this partnership could evolve and grow, but for now we’re really focused on doing what we do best: providing entertaining, inspiring, smart information to people—and hearing back from them!”