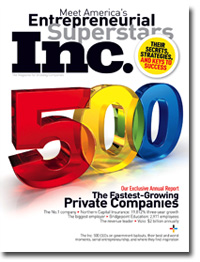 Mansueto Ventures’ Inc. magazine unveiled its third annual list Wednesday of the 5,000 fastest-growing privately held companies in the U.S. Ranking first among magazine publishers is FriendFinder Networks, the Boca Raton, Florida-based publisher of Penthouse magazine. The company placed 210 overall on the list and third in the media category.

Between 2005 and 2008, FriendFinder saw revenue grow $31 million to $331 million—an increase of 966.4 percent. In addition to publishing Penthouse and other men’s titles, FriendFinder operates sexually-oriented social networks and distributes pictures and video. The company applied for an IPO late last year.

Companies on the 2009 Inc. 5000 list are ranked according to percentage revenue growth from 2005 through 2008. Qualifying companies are required to have been founded and generating revenue by the first week of 2005 and to be able to show four full calendar years of sales. They must be U.S.-based, privately held, for profit, and independent—not subsidiaries or divisions of other companies—and must have had at least $200,000 in revenue in 2005 and at least $2 million in revenue in 2008.