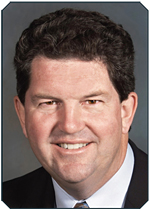 In the past year, Donahoe has pledged to support to the magazine industry—an individual that definitely has influence on the business.

In 2012, the rising cost of doing business as a magazine publisher is apparent, and the idea of having periodical rate increases is downright scary. In comes industry influencer Postmaster General Patrick Donahoe, who is easing our worries, just a bit.

During a keynote speech at the MPA’s first postal summit in February, Donahoe reassured the industry leaders in the room of the Postal Service’s continued commitment to magazine media, while also remaining steadfast on the realities surrounding the challenges the USPS is combating.

“Your trust and your business means a lot to us,” he said. “We’re in a pretty tough situation right now, and what we’re facing is continued drop off in first-class mail, and that is the underlying issue and it has been the problem now for the better part of 10 years. We know that this is not just a postal problem, but an industry problem.”

Donahoe told the audience he values the business of the magazine industry because it’s one of the reasons individuals go to the mailbox. The postmaster added that he will not “cry wolf” and say the USPS won’t deliver mail, rather saying the group would figure things out, one way or another, to ensure delivery. Additionally, maintaining good financial standing with the magazine publishing industry is clearly a priority for Donahoe.

“You don’t hear me walking around saying we need an exigent price change—that will push you, bill presenters and standard mailers out of the mail,” he said. While Donahoe did pledge support for keeping prices low, he did later say, “Until legislation is passed, what I won’t do is take anything off the table.”

VITAL STATS: The postmaster has a $20 billion plan for the USPS—it includes resolving worker healthcare costs and reallocating some of those resources for operating costs; eliminate pre-funding retiree benefits; eliminating Saturday delivery of service; consolidating the USPS network and reducing the number of career USPS employees. Donahoe says that cutting delivery from 6 to 5 days a week would save the USPS about $3 billion annually. Doing these things, he adds, will help keep away exigent price changes.