Paste Launches Campaign to Save its Magazine
Cash-strapped music title appeals to readers ‘rather than shut its doors.’ 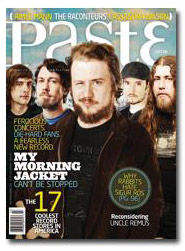 Paste, a music magazine that has launched a slew of campaigns over its seven years in print, is launching a new one—this time, to save itself.

The Decatur, Georgia-based title announced late Wednesday an online initiative—dubbed “Save Paste”—to “to keep the magazine functioning in the midst of the global financial recession.”

In an announcement, Paste said it has suddenly found itself cash-strapped, and in crisis-mode.

“As a completely independent magazine, Paste has struggled for the past nine months as advertisers have decided to wait on buying ads in response to the recession,” the statement read.  “Last month, cash received unexpectedly reached an all-time low, and turned a tough situation into a short-term crisis. Rather than shut its doors, Paste is launching a reader appeal today to help save the magazine.” Readers who donate will receive exclusive tracks solicited by Paste from some of the musicians it covers.

The 180,000-circ magazine said it has implemented several cost-cutting measures, including a 20 percent pay cut, leasing out office space and eliminating all "non-essential travel."

Paste is also upping its annual frequency from 11 issues to 12—but six of those will now be "mini-sized single-topic issues," according to editor Josh Jackson. The first "mini" issue will be its June "Summer Festival Guide." (The issue won’t appear on newsstands but will get some disribution of college campuses, Jackson said.)

"We’ve traditionally been lax about ad/edit ratio," Jackson told FOLIO:. "One downside to having an editor as co-owner is that I’m always arguing for more pages—great for readers, but not always responsible for business."

Jackson said he hopes to raise an amount "in the low six-figures" to insure Paste’s survival.

This is not the first time a magazine has appealed to its readers to stay afloat. In 2007, the Nation launched a campaign to raise $500,000 to combat rising postal costs.

Paste has experimented with other revenue-generating stunts, too. In 2007, the magazine launched a pay-what-you-want subscription campaign, similar to the rock band Radiohead. (The title added roughly 28,000 paid subscribers to its list. Over 31,000 took advantage of the pay-what-you-want offer, paying an average of $4.00 for a year-long subscription to the magazine.)

Paste was nominated for a National Magazine Award for general excellence earlier this year.