Paper Industry Stabilizes
A look at the numbers.

The paper industry is stabilizing in the face of downward pressures, but things are more uncertain for the sectors serving the magazine market.

As a whole, U.S. paper companies have seen sustained growth since 2009, with revenue slowly approaching where it had been before the recession.

Revenue for the country’s Top 100 paper companies totaled $354 million in 2012, according to the most recent data from PricewaterhouseCoopers. Quarterly snapshots paint a similar portrait-the nine largest U.S.-based forest and paper companies increased net earnings by 40 percent year-over-year and by 145 percent from 2012, in Q4 of 2013.

Meanwhile, magazine paper specifically is stabilizing, but continues to decline. Aside from a price hike ahead of the busy fall season, demand has been steadily trending downward.

Orders for coated mechanical paper used to make magazines dropped 4 percent in March, according to the American Forest & Paper Association (AF&PA). The good news? It was one of the industry’s best periods in the last 18 months, and part of a positive trend.

The downward pressure on advertising pages and the exigent rate hike by the U.S. Postal Service have many concerned about demand moving forward though.
Consumer magazine ad pages fell off 4.1 percent in 2013, and 4.0 percent in the first quarter of 2014, according to the MPA-The Association of Magazine Media, while the mailing increases threaten a major source of income for the paper industry at large.

"Approximately one-third, or $6 billion of printing and writing paper produced in the U.S. is delivered through the mail system," the AF&PA said in a statement at the time the increase was proposed. "An exigent rate increase would threaten the future reliance on mail as a competitive option for paper-based communication and commerce." 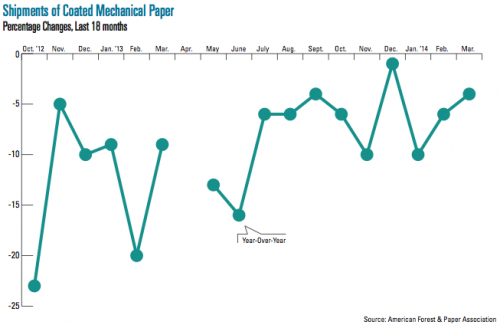