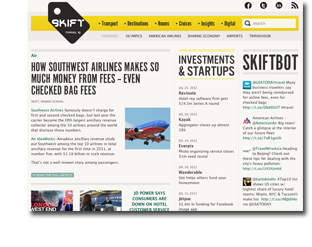 Rafat Ali, the founder of PaidContent.org, has launched a new venture called Skift. The company will target the business travel industry with a hybrid approach that serves up content and data for travelers as well as the market’s suppliers.

So far, Skift has raised $500,000 in angel funding, which kicks in at launch and will be used to scale the operation going forward. Ali has self-funded the project to this point. There are a dozen investors including Chris Ahern, Gordon Crovitz, Alan Meckler, Luke Beatty, Tom Glocer and Vishal Gondal.

Ali says the travel vertical is ripe for disruption. "When I started looking at doing something in this industry I discovered the sources are very old-school. They are also very siloed in their sub-sectors. No one is bringing it all together in a Web-native, social-friendly fashion of the kind that exists in the media, tech or finance markets."

Phase one, he says, will be to create "a homepage for the industry," which to this point has largely been fed by aggregation software PublishThis. As the site expands, more content will be added through human curation and original reporting.

The plan is to create a b-to-b destination site for the business travel market, with the content supported by advertising—endemic trade advertisers as well as consumer-oriented advertisers looking for an audience of business travelers. But the site will not solely rely on ad revenue—or content.

Skift will also have a data services operation supported by a variety of subscription models. The data will initially be pulled in from publicly available sources, such as tourism, airport and arrival-departure data at the global and local levels. As the company grows, proprietary data will be added to the mix. This, says Ali, will be Skift’s core value proposition.

"The better way to build a media company is not through content, but services. Media is a great way to build a brand, but the best way to scale is to figure out the data services that the industry and people will pay for."

Ali sold PaidContent.org’s parent company ContentNext Media, Inc. to U.K.-based Guardian News & Media back in 2008 and left two years later, embarking on a glob-trotting adventure of his own as he figured out his next project.

In the meantime, Guardian News & Media put ContentNext on the block in 2011 and sold it to online tech publisher GigaOm in February this year.