Paid Subs Are Up for Women’s Titles
Newsstand sales during second half continued to decline, but at a slower pace. 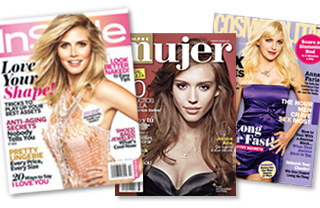 According to estimated figures provided by publishers to ABC’s Rapid Report, the women’s category saw meaningful improvement in paid subscriptions during the second half of 2009, while total paid and verified circ remained relatively stable. Newsstand sales, however, continued to decline, but at a slower pace when compared to previous periods.

It was good news for paid subscription sales for most major titles in the women’s category with slight-to-moderate increases during the second-half of 2009 compared to the same period the year before. Only ttwo titles—out of those that provided Rapid Report estimates for this period—saw a decline in sales.

For the most part, the upward momentum carried forward from the first half, thought not as dramatically, where most titles in the women’s category showed single-digit percent changes in paid subs. InStyle’s second half 2009 paid subs increased by 2.1 percent, compared to the first half of the year. Glamour saw a slight increase as well by 3.5 percent. On the other hand, Siempre Mujer’s paid subs decreased by 2.4 percent, while Seventeen’s decreased by 4.5 percent.

Total paid and verified circ for women’s titles during this period have remained stable with the majority of titles posting a slight increase compared to the year before.

Compared to the first-half of 2009, it was a mixed bag with half of the titles in the category seeing a slight reduction in paid/verified circ while the other half posted small increases.

Based on newsstand sales for many top-selling publishers during May and June of last year, industry experts predicted that the steep newsstand decline of late 2008 and early 2009 would start to slow down and it appears that they were right.

Yet for a few titles in the SRDS-classified women’s category declines continued at an alarming rate. Good Housekeeping saw the biggest decline in newsstand sales (-30.7 percent) selling 395,289 copies during the second half compared to 570,789 copies the year before. Redbook (-30 percent), Essence (-22.2 percent) and Self (-18.7 percent) followed.

ABC is scheduled to release its latest Fas-Fax report next Monday.