Newsweek Unveils ‘The Newsweek’
Will an Economist-style makeover work? 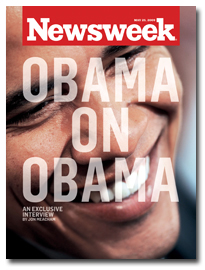 In December, FOLIO: published a report on Newsweek, breaking the story that the venerable news magazine was considering an overhaul—rethinking everything from its circulation to its design to its news coverage to its voice—with the end result something akin to the Economist, a “thought-leader” position editor Jon Meacham (and Time editor Richard Stengel, for that matter) not-so-secretly covets. (It was one of our most highly-trafficked stories of 2008; Newsweek eventually confirmed the news.)

Well, today marks Day One of the New Newsweek (we’re calling it “The Newsweek”).  And Meacham explains the shift (“A New Magazine for a Changing World”) in his editor’s letter:

It is no secret that the business of journalism is in trouble. Venerable American institutions are facing uncertain futures; once profitable enterprises are struggling to find ways to fund their operations. At an otherwise lighthearted White House Correspondents’ Association Dinner, President Obama concluded his remarks on a serious note, expressing his sympathy for the trade’s plight and quoting Thomas Jefferson, who remarked that he would rather have newspapers and no government than a government without newspapers.

The point, we believe, holds true for a magazine like ours. We think what we do is important, but in the end what matters more is whether you think so, and in so thinking, whether you find that our work repays the investment of your time. And so the magazine you are holding now—the first issue of a reinvented and rethought NEWSWEEK—represents our best effort to bring you original reporting, provocative (but not partisan) arguments and unique voices. We know you know what the news is. We are not pretending to be your guide through the chaos of the Information Age. If you are like us, you do not need, or want, a single such Sherpa. What we can offer you is the benefit of careful work discovering new facts and prompting unexpected thought.

Counterintuitively, perhaps, the weekly cycle is a promising one in a world running at a digital pace. The Internet does a good job of playing the role long filled by newspapers, delivering headlines, opinions and instant analysis. Many newspapers have long been forced into a traditional newsmagazine model, with longer-form reporting and more big-picture thinking, but they still have to do it every day, and there is only so much wisdom one can summon in a few hours. As we see it, NEWSWEEK’s role is to bring you as intellectually satisfying and as visually rich an experience as the great monthlies of old did, whether it was Harold Hayes’s Esquire or Willie Morris’s Harper’s, but on a weekly basis.

There will, for the most part, be two kinds of stories in the new NEWSWEEK. The first is the reported narrative—a piece, grounded in original observation and freshly discovered fact, that illuminates the important and the interesting. The second is the argued essay—a piece, grounded in reason and supported by evidence, that makes the case for something. What is displaced by these categories? The chief casualty is the straightforward news piece and news written with a few (hard-won, to be sure) new details that does not move us significantly past what we already know. Will we cover breaking news? Yes, we will, but with a rigorous standard in mind: Are we truly adding to the conversation? When violence erupts in the Middle East, are we saying something original about it? Are our photographs and design values exceptional? If the answers are yes, then we are in business.

Read the rest of Meacham’s letter here. See the new table of contents and interior spread below. 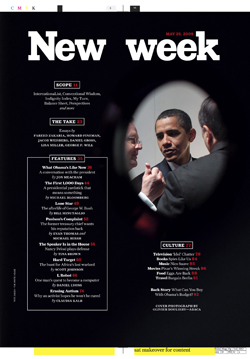 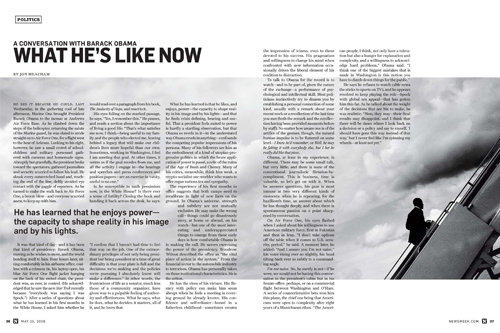