NAPCO Media Acquired by Printing Industry Trade Association
SGIA pledges to operate the Publishing Executive and Printing Impressions parent as an "independent entity," and says all NAPCO staffers will remain in place. 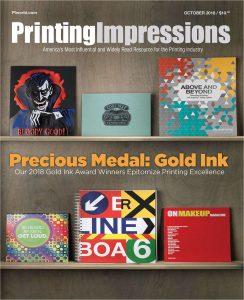 The Specialty Graphic Imaging Association (SGIA), a printing industry trade group, announced this week that it has acquired NAPCO Media—the Philadelphia-based B2B publisher of Book Business, Printing Impressions and Publishing Executive, among a handful of other titles—for an undisclosed sum.

Interviewed by Wynalek earlier this week, NAPCO president Dave Leskusky—who will continue to lead the media group—and SGIA CEO Ford Bowers echoed many of the same reasons given for PMMI’s purchase of Summit in 2014, extolling the combined reach and complementary offerings of the two organizations across media, events, research and training, while at the same time referring to their relationship as “a partnership” and issuing assurances that NAPCO will continue to operate “independently from an editorial perspective” out of its Philadelphia offices (SGIA is based in Fairfax, Va.).

Groundwork for the acquisition was first laid in 2017, when NAPCO and SGIA partnered to launch the trade show Printing United, an expanded version of its predecessor, the SGIA Expo, which is set to debut in Dallas in October.

“NAPCO’s mission is to build community between its audience and its clients and deliver value that generates measurable results,” said one of the execs, per Pub Exec. “SGIA is a community that strives to be the foremost resource for information and education for the printing industry. NAPCO Media brings complementary audiences and services to SGIA and vice versa; there are very few redundancies.”

In addition to those mentioned above, NAPCO operates a number of brands outside of the printing industry, such as Target Marketing and Total Retail, but Bowers said SGIA plans to further invest in those brands as well, and an additional press release noted that “all NAPCO Media staff and business units will remain in place.”

“Printing is in SGIA’s DNA, but that’s not going to deter us from continuing to support other vital brands in the NAPCO portfolio.”

For what it’s worth, all four Summit Media Group titles acquired by PMMI in 2014—Automation World, Contract Packaging, Healthcare Packaging and Packaging World—remain in print five years later, and the company launched an additional title in 2016.

Formed by Philadelphia native Irvin J. Borowsky in 1958 as the North American Publishing Company with a sole magazine, Printing Impressions, NAPCO was family-held for over 50 years prior to this week’s sale. In 1990, control of the company passed to Borowsky’s son Ned, who ran day-to-day operations until Leskusky took over as president in 2013.