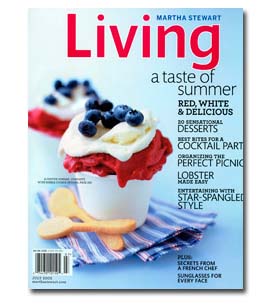 Martha Stewart Living Omnimedia says it is seeing continued “stabilization” in the publishing segment of its business. As part of its second quarter earnings report, the company said that segment generated $30.6 million in revenue, a decline of less than 9 percent from $33.5 million during the same period in 2009. Operating income was $2.1 million, down from $3 million during last year’s quarter.

MSLO attributes the loss primarily to the timing of the spring issue of Martha Stewart Weddings, which last year included during the second quarter in 2009 but during the first quarter this year. Excluding the spring issue, MSLO says the publishing division would have reported a 3 percent increase in advertising revenue.

“At the midpoint for the year, we are holding our own in the marketplace as we continue to aggressively roll out new relationships,” MSLO executive chairman and principle executive officer Charles Koppelman says in the release announcing the report. “We’re seeing continued stabilization in publishing and strong growth in Internet."

Revenues from the Internet grew 12 percent during the second quarter to $4.7 million, compared to $4.2 million during last year’s period. Merchandising revenue, meanwhile, increased more than 30 percent to $11.8 million.