MPA Study: Social Media Enhances Magazine Consumption, Engagement for Millennials
About 56 of respondents say they follow a magazine on Twitter.

In a new study produced by the MPA, the Association of Magazine Media, and research firm GfK MRI, data reveals that Millennial magazine media readers aged 18 to 34 believe that technology has improved their experience of accessing various media—including magazines.

While the study shows that social media can act as an enhancement to accessing or interacting magazine content, only 40 percent of the 1,019 respondents have self identified as “avid magazine readers,” with 95 percent of that group reading printed titles and 43 percent reading digital editions.

About 91 percent of all of the respondents use Facebook, followed closely by YouTube at 61 percent. Twitter ranked as the third most used form of social media at 40 percent, followed by Google+ at 33 percent. About 90 percent of those identified as avid magazine readers use Facebook.

“The results of MPA’s new study clearly demonstrate that social media enriches the magazine reading experience, and that magazine media readers—on all platforms—are creating communities around and engaging with the magazines and editors they know and love,” Chris Kevorkian, MPA’s chief marketing and digital officer, says in a news release.

When it comes to platforms, the majority of all respondents own some sort of digital device that enables reading. About 69 percent own a smartphone, with the highest percentages owning an Apple iPhone (32 percent) or an Android phone (30 percent). Of the total respondents, 41 percent own a tablet device and 27 percent own an e-reader. The most popular tablets were an iPad (26 percent) and an Amazon Kindle Fire tablet (10 percent). About 19 percent owned an Amazon Kindle e-reader, followed by a Barnes & Noble Nook at 5 percent.

About half of all respondents (52 percent) say they use the Internet and any other resource to engage with brands that really interested them, or they view as important. Using social media to enhance a different media experience is a common practice among Millennials, with 39 percent of respondents claiming they do so.

Only 19 percent of all respondents, and 30 percent of avid magazine readers, have searched for a magazine on Twitter. Users of newsreaders have only slight popularity among the respondents, with 28 percent saying they use them. The most popular newsreaders among respondents that did use them was Pulse (42 percent), followed by Currents (29 percent), and Editions, Livestand and Flipboard all lading at 25 percent. Those that did use such a newsreader say the biggest reason for doing so is because its fun (46 percent).

When it comes to payment, one interesting point was exclusivity, as shown in the graph below: 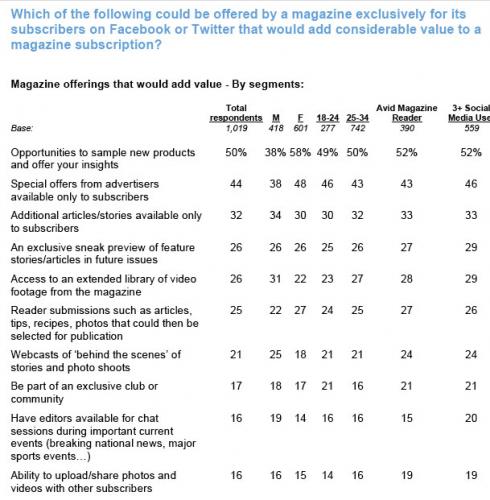