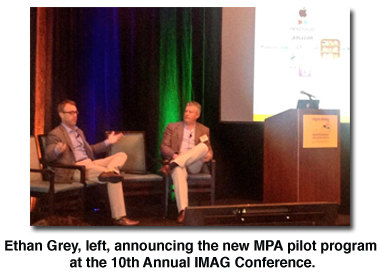 NEW ORLEANS—About 100 independent magazine media professionals descended on the Big Easy this week for the MPA’s 10th annual Independent Magazine Media Conference (IMAG). While the event was focused on strategies and tactics for the independent market, during the first full day of the conference the association announced a new pilot program that could stretch far across the entire magazine market.

At a morning session on digital magazine measurement, Ethan Grey the association’s SVP of Digital Strategy and Initiatives, formally introduced a multi-industry pilot program that aims to provide consistent measurement and reporting of standardized metrics and data sets for magazine media across tablets and other digital platforms.

“Digital editions are like having every international plug in front of you—they’re all different,” Grey said. "Every electrical outlet works exactly as designed, and all deliver power, but they’re incompatible."

The fundamental issue is two different publishers can both create a digital edition and have a single ad unit applied. Yet, depending on what platform the digital edition was built in, data sets from the same ad may vary widely—though both are equally accurate.

“There is no common factor,” he said. “The exact same ad will deliver completely different data sets. They’re both right, but they’re not apples to apples.”

To get advertisers to come on board in a deeper and more meaningful way, Grey and his team are expanding on the five recommended metrics for quantifying the digital publishing field that were first released last spring.

“We are now actually baking these metrics into the software—we’re coming together to impact utility standards,” he said. “It’s one of the most important things the industry will do.”

The opt-in program currently has about 20 different publishers participating, and the MPA says it anticipates sharing the first results of the program in October at the 2013 American Magazine Conference (AMC). With this newly developed program, data reports from digital editions will be standardized and will automatically include the following:

1. Total Consumer Paid Digital Issues: An
unauthenticated/bundled issue, which has been paid for by an end
user—sponsored, corporate or "free" editions will not be counted.

2. Total Number of Digital Edition Readers Per Issue: The total number of “unique” readers who have opened a “full edition” on a device for the first time.

3. Total Number of Sessions Per Issue: The total number of aggregate sessions for all versions of the specified digital edition across all digital newsstands.

4. Average Amount Of Time Spent Per Reader Per Issue: The aggregate total time spent across all measured digital issues divided by the total number of “unique readers.”

5. Average Number Of Sessions Per Reader Per Issue: An audience/engagement metric, derived from the aggregate total number of
sessions across all measured digital issues divided by the total number
of “unique readers.”

In order to participate right now, publishers need at least one digital magazine edition on Apple, Google Play, B&N Nook or Zinio, though the MPA says it welcomes additional newsstands and providers to join the pilot program.

If a provider would like to implement these standards into their software, the MPA says it is open to working with partners to include this standardization. Right now Adobe DPS v. 28* has already built in these standards. Metrics, as of now, will be delivered through Adobe Site Catalyst version 14+ or Google Analytics, though the MPA welcomes additional partners.

“In the absence of measurability, we lose out,” added Grey. “To me this is a move to regain a lot of ground in this shift of advertising spend.”

*Editor’s Note: An earlier version of this story incorrectly stated that only digital publications created with Adobe’s DPS will be able to participate. As of right now only Adobe offers support for these metrics, though the MPA says it would welcome additional partners.