The Most-Followed Magazines on Twitter
From People to Parenting, the top 50 magazine brands.

Magazines have been at the Twitter game for a while now, and many have built large, loyal followings–much larger than their newspaper counterparts.

There are eight magazine brands with more than a million followers, and 14 with more than half a million, while the newspaper industry has just two: the New York Times (2,882,697) and Wall Street Journal (618,751). Inspired by a survey done by The Wrap last fall, we decided to take an updated look at the magazines with the most Twitter followers.

The following list of most followed magazines was culled at the end of January (follower counts were taken on Jan. 31). For about 50 titles, the follower counts were compared to a similar count conducted in October, to see how their counts grew over the last three months. Among the top 25, Rolling Stone (#25) and The New Yorker (#14) both grew about 30 percent in terms of followers, while the Economist (26 percent) was not too far behind.

"We have a whole team of people working on our Twitter feed," Time executive editor Jim Frederick said at the MPA’s inaugural Social Media conference last month. "There’s an art and science to Twitter."

But despite their growing presence on the microblogging platform, magazine publishers have yet to figure out how to monetize their Twitter followings.

"The reality is, they’re bundled into packages," not sold against directly, Steven Schwartz, chief digital officer at Wenner Media, admitted. "We’re all learning."

Often a magazine’s entire Twitter audience isn’t tied specifically to the main magazine brand. New York claims it has a total of 250,124 followers divided up across several different handlers including @NYmag with 27,722; @Vulture with 19,111; @Cutblog with 174,394; @DailyIntel with 7,689 and @GrubStreetNY 21,208. 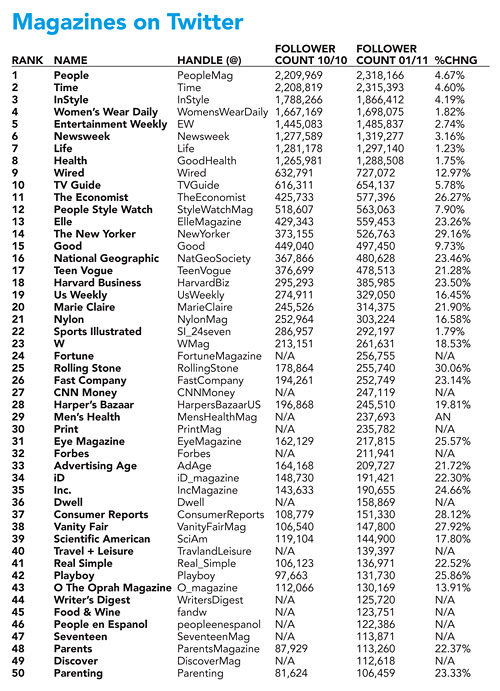