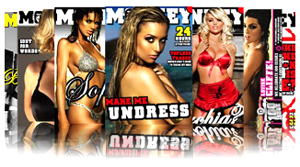 Having a tough time selling ads into your digital magazine? You’re not alone. While it is nearly impossible to sell ads into digital replicas of print magazines, there is a thriving new breed of digital magazine originals blowing away the conventional wisdom that digital magazines are an ad sales death trap.

These digital-original publishers are doing things very differently. One of true pioneers and success stories is Monkey, a “lad” book from Dennis Publishing U.K. with an impressive 270,000 weekly ABCe audited circulation and robust ad sales.

What about length? Monkey magazine is only about 30 pages per issue.

Eoin: We’ve played around with this. When our digital magazine arrives, if it seems dense and people think they don’t have time to read it, they might not open it. So we keep it short and make it seem very easy to digest.

As a digital magazine you kept the page turns. Why?

Eoin: What we liked about the idea of a page turning magazine was that it has a beginning and an end, so it looks like it takes only take a little chunk of time to read. When you’re surfing the Web, the only time constraints are ones you set for yourself. With Monkey, we take a little chunk of 25 or 30 minutes each week and cover all the aspects of what young men would be looking on the Web for anyway.

How was the start of selling advertising?

Eoin: Like any new thing, people were very tentative when we were starting to sell ads. One problem was that advertisers didn’t know where to categorize us. Are you a Web site or a magazine? Also, one of our biggest questions in the early stages was, “Who are we going to speak to?”

That was two years ago. Now you have a successful, ad-supported digital magazine. When you call on an ad agency do you call more on print buyers or online buyers?

Eoin: It varies from agency to agency. A lot of agencies are getting wiser to digital magazines now. But a traditional standard flat page in Monkey doesn’t work as well as one that has video, so we tend to be going more to online media departments now.

How do you handle clickthrough reporting?

Eoin: We have a very open policy about letting people know exactly how many clickthroughs and page views they are getting. We generate great results. The results have been very good and I think our transparency has helped us a lot.

Do you have any advice for people starting an ad-supported digital magazine?

Eoin: You need to start with a list. If you’ve got a decent list then you can find out what they really like and what they don’t. Just keep it very honest. Then we react to what is happening on the ‘net and add a little bit of structure. It is the same way that  magazines like The Week condense all the news for you. We condense all the fun stuff for young men.