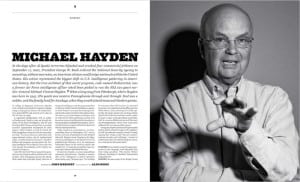 Playboy’s interview with, former head of the CIA and NSA, Michael Hayden, resulted in honest, raw self-reflection on Hayden’s time as part of the Bush administration during the Iraq war. He also talked about Hilary Clinton’s emails, Edward Snowden, waterboarding, Russia, and much more—nothing was off-limits to Playboy.