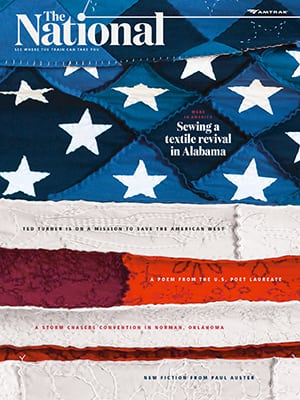 The National is the bi-monthly, onboard American culture magazine for Amtrak, published by Ink. In the three issues since its October 2016 launch, The National has established itself as a distinctive voice celebrating the culture and industry defining life along America’s rails—in Amtrak’s 500 destinations and everywhere in between.

Starting with its inaugural issue, the magazine has featured an impressive roster of contributors and interview subjects. They’ve published in-depth Q&As with thought leaders including Gloria Steinem and Alice Waters for “The National Conversation,” and featured fiction, poetry, and essays from some of America’s most acclaimed voices, including Ann Patchett, Jack Kerouac, Paul Auster, and U.S Poet Laureate Juan Felipe Herrera.

The National launched with a cohesive, original vision for celebrating Americana, and with each issue continues to provide a fresh look at the vibrant communities and cultures that exist along Amtrak’s routes.