Microsoft to Shutter MSDN Magazine After November Issue
"We realized that it is time to retire MSDN Magazine and to carry on its work through web channels like docs.microsoft.com." 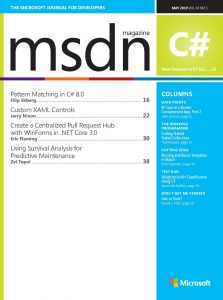 Microsoft is pulling the plug on its developer-focused MSDN Magazine, the software giant has revealed, ending the monthly title’s run—both in print and online—after nearly two decades.

The November issue of MSDN will be its last, according to a brief announcement posted on the magazine’s website Monday, which noted that back issues will continue to be available online and that readers whose paid subscriptions extend beyond November will be given prorated refunds.

“As Microsoft products and services expanded exponentially over the years, MSDN Magazine has gone through its own evolution, as well,” read the announcement. “We realized that it is time to retire MSDN Magazine and to carry on its work through web channels like docs.microsoft.com.”

Born in 2000 from a merger of two predecessors—Microsoft Systems Journal and Microsoft Internet Developer—MSDN was published in monthly installments by United Business Media on Microsoft’s behalf until 2009, when another B2B publisher, 1105 Media, took over the contract along with another Microsoft title, TechNet, whose print edition was ultimately discontinued in 2013.

MSDN—which claims a circulation of 80,000 as well as 850,000 monthly readers online—is the only remaining print magazine published by Converge360, 1105 Media’s custom content/marketing services division, which was formed last year and also houses digital-only brands like Redmond, MCP Mag and Enterprise Systems Journal, among others.

“Microsoft has shifted the focus of its outreach efforts to the docs.microsoft.com site, and the content of MSDN Magazine will be migrated to that location over the coming weeks and months,” Christopher Kourtoglou, associate publisher at Converge360, tells Folio:.

Neither Microsoft nor 1105 answered questions about what will become of MSDN‘s existing staffers after the final issue is published. The masthead printed in the magazine’s May issue lists about a dozen editors and contributors in addition to the art, production and sales staff from the 1105 side.

“It’s with heavy heart I announce that MSDN Magazine will close after the Nov. issue,” wrote editor-in-chief Michael Desmond on Twitter. “For 33 years, [MSDN] and its predecessor (Microsoft Systems Journal) have provided hands-on guidance to Microsoft developers.”