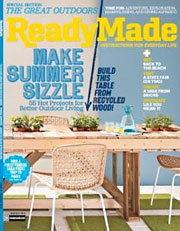 "Positioning Meredith for continued growth requires periodic realignment of resources, including how we deploy our workforce," said Meredith Chairman and CEO Steve Lacy in a statement. "These actions will enable us to devote additional resources to key strategic growth initiatives, including digital platform expansion."

Meredith acquired ReadyMade in 2006 and boasted paid and verified circulation of about 335,230. However, ad pages fell 8.5 percent to 17.6 in the first quarter of 2011 (after an 18.4 percent gain in pages in 2010) according to Publishers Information Bureau. In February, ReadyMade publisher Jeff Wellington left for Scholastic Parent & Child and a replacement wasn’t named.

According to MagazineRadar, Meredith posted the largest drop in ad pages among six major publishers in the first three months of 2011.