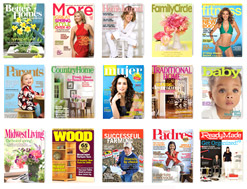 “Meredith was cycling against its strongest quarter of industry outperformance (nearly 30 percentage points) in the prior-year period, according to Publishers Information Bureau data,” the company says.

Overall, Meredith says it reduced company expenses by an additional 1 percent on top of an 8 percent decline during last year’s fiscal first quarter. The company’s debt stands at $285 million and it carries a debt-to-EBITDA ratio was 1.1 to 1 as of September 30.