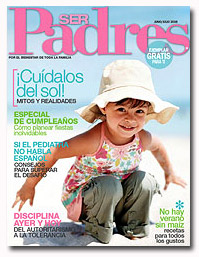 Meredith Corporation’s Hispanic Ventures division is relaunching and rebranding two of its Spanish-language parenting magazines in an effort to capitalize on its 18-year-old flagship brand Ser Padres.

Espera, a magazine for expectant mothers, will be renamed Ser Padres Espera and will increase in annual circulation by 35 percent to 1.05 million while upping in frequency from two to three times a year. 12 Meses, which focuses on the first year of a child’s life, will be renamed Ser Padres Bebe and will continue with a yearly circulation of 600,000. Both magazines will “get a fresh look, editorial configuration and visual redesign,” along with new columns, according to Hispanic Ventures executive director Ruth Gaviria.

“We know that Meredith Hispanic Ventures’ premiere brands are Ser Padres and sister publication Siempre Mujer, so we made the strategic move to capitalize on Ser Padres’ brand equity and authority in the marketplace and shift those titles under its editorial direction,” Gaviria wrote to FOLIO: in an email. “Now, our content portfolio takes Hispanic women from pregnancy, to birth, to raising your child, to a magazine all about being a woman in a bi-cultural world—Siempre Mujer.”

Ser Padres was one of the biggest gaining consumer magazines ad revenue-wise in the second quarter 2008, according to figures from the Publishers Information Bureau. At $7.2 million, the title saw a 161.2 percent increase in ad revenue during that time period, despite an overall decrease of 5 percent among consumer titles. Last October, the magazine increased its rate base by 40 percent to 700,000 after folding its Healthy Kids en Español title into it. Ser Padres was launched in 1990 as an offshoot to Parents magazine, both of which were acquired by Meredith from Gruner + Jahr in 2005.

The company is also set to launch next month a blog—Mimosblog.com—for Hispanic mothers, to focus on pre-natal through pre-teen years of motherhood. According to the company, the number of unique Spanish-preferred Hispanic visitors to blogs has grown by 82 percent.