Meredith Brings Subscriptions Back to Coastal Living, Citing “Resounding Success” on Newsstands
The company had transitioned it to a newsstand-only quarterly last year to alleviate dependence on print advertising. 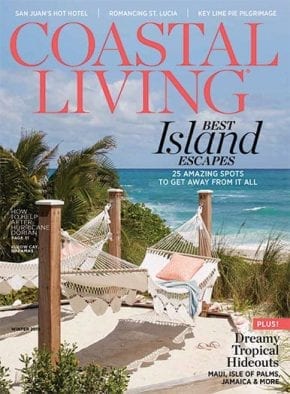 After what it’s calling “resounding consumer demand and success” since transitioning Coastal Living to a newsstand-exclusive magazine a year ago, Meredith Corp. announced Tuesday that it is once again selling subscriptions to the 22 year-old title, which it acquired through its merger with Time Inc. at the start of 2018.

The news comes a little over a year after declines in print advertising led the company to scale back Coastal Living to a quarterly frequency, forgo a subscription-based model and pursue a more consumer-driven, newsstand-only arrangement.

A rep for Meredith says it’s premature to share precise newsstand sales figures, but noted that Coastal Living has achieved sell-through rates of between 20 and 30% since the changes, beating internal estimates. Overall, Meredith reported a company-wide 8.9% year-over-year increase in single-copy magazine sales during its most recent quarter, to $42.6 million.

Under the newsstand-only model, which involved upgrades to the magazine’s paper stock and trim size, the cover price has more than doubled, to $12.99, and subscriptions will be priced at $20 for four annual issues or $30 for a two-year commitment.

“With a substantial customer base that is looking for premium, high-quality niche content, Coastal Living is a good example of a consumer-driven product with what I’d call an analog paywall,” said Meredith Magazines president Doug Olson, adding, “This direct-to-consumer model is ideal—it provides a high-quality product to passionate enthusiasts and at the same time, it’s a strong, profitable business.”

The company has made similar changes over the past year to Cooking Light, Traditional Home and, most recently, Rachael Ray Every Day, but Coastal Living is the first of the group to see the return of subscription sales.

In other recent changes, Meredith revealed last month that it is shuttering 87-year-old Family Circle outright, but investing in the former Time Inc. magazine Health, expanding its staff and upping the trim size and paper stock of its print edition, which currently comes out 10 times per year.

On the company’s Q1 earnings call on November 7 (Meredith’s fiscal years begin and end in midsummer), Meredith president and CEO Tom Harty underscored the company’s focus on consumer-driven revenue, both in print and online, and suggested similar changes could be in store for other magazines in its portfolio.

“As we see decreased advertising demand or volume over time, we plan to change the portfolio and look at opportunities to increase our consumer revenue, like charging people more money on the newsstand for specific titles, as we are doing with the Property Brothers and Magnolia Journal,” he said. “It’s really kind of a financially driven analysis to figure out when the model flips for a specific brand from being more advertising-driven to more consumer-driven, and we’re looking at that over time.”

Meredith has emphasized that consumer revenue will remain the main focus for Coastal Living, but says the return of a rate base is possible, depending on the number of subscriptions it can sell. On the other hand, the company says Southern Living—like Coastal Living, a former Time Inc. title produced out of Meredith’s Birmingham, Ala. offices under the editorial direction of Sid Evans—has actually experienced growth in print advertising over the past year.

“This return to subscriptions is a strong testament to the power of the Coastal Living brand and the unique product we’re delivering to consumers,” said Evans in a statement. “If you love the beach lifestyle, Coastal Living is a must buy. There’s just nothing else like it.”