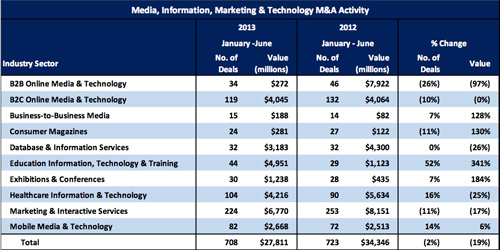 Media business purchasing picked up after a slow first quarter, but year-over-year activity was down slightly in the first half of 2013, according to a report from the Jordan, Edmiston Group (JEGI).

While lower than 2012, those totals still represent a significant gain over recent historical activity. First half deal value hadn’t topped $25 billion since 2007 ($65.8 billion); the number of deals had never even hit 500 until last year.

Marketing & Interactive Services was the biggest mover of the 10 sectors measured by JEGI. Its activity accounted for close to a third of the total deals announced (224) and about a quarter the transaction value ($6.7 billion).

Results were mixed for media in particular.

Mobile media and technology had a 14 percent increase in volume (82 deals) and rose 6 percent in value ($2.7 billion).