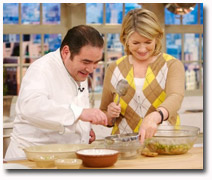 It’s official: Martha has a new cook in the kitchen.

At closing, the purchase price was $50 million ($45 million in cash and $5 million in stock) and could reach up to $70 million if certain performance targets are realized in 2011 and 2012. MSLO expects the assets to generate adjusted EBITDA of approximately $8 million in the first full year.