While salaries at the ED/EIC and editor/executive editor levels stayed close to historical norms in general, pay for managing and senior editors jumped considerably in b-to-b and consumer segments in this year’s survey.

One of the biggest shifts for this category occurred at paid publications. Those editors saw salaries go up $16,800, while managing and senior editors at controlled-circulation titles got a $3,900 raise and those with mixed circulation had a modest $800 increase.

The gender gap increased to $12,800 in 2013, staying in line with pay disparities at the ED/EIC and editor/executive editor levels.

Managing and senior editors separated from the other groups when it came to education though. Those who had at least some postgraduate education earned $12,800 more than those with just an undergraduate degree—close to the historical pay divide based on education. ED/EICs and editor/executive editors saw that difference drop significantly to just $2,700 and $1,000, respectively. 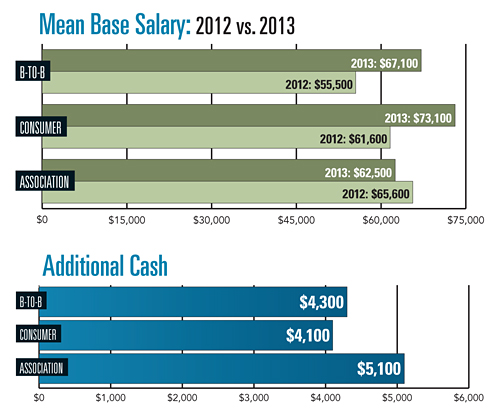