Why Ridiculous Covers Matter
Controversy may not always sell, but can still make an impact. 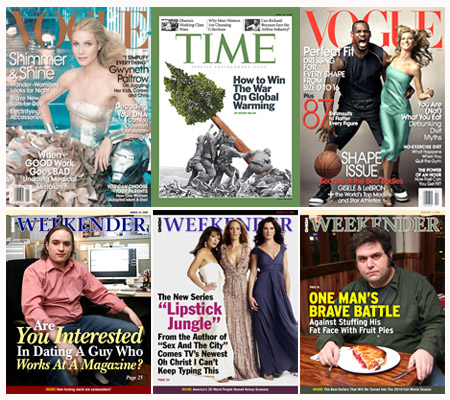 If magazines like Vogue and Time keep it up, the Onion’s mock magazine covers won’t be so funny anymore—the real ones are getting just as ridiculous.

Gisele looks like a cardboard cut-out on Vogue’s controversial King-Kong-throwback cover from April, and Gwyneth Paltrow looks nothing like herself on May’s. On Time’s latest cover, the second ever to break the red border code, the American flag on the venerable Iwo Jima memorial is replaced with what looks like a cartoon carrot. That cover, not surprisingly, has generated a ton of controversy.

As one FOLIO: design panelist recently wrote: "What better way to sell magazines than to run a controversial cover?"

But controversial covers don’t always increase sales. One of Time’s most politically controversial covers—a cover featuring Ronald Reagan with a tear photoshopped on his cheek in March 2006—sold 106,700 copies at the newsstand, little more than 3,000 above the average during the issue’s reporting period, according to the Audit Bureau of Circulations.

Sales, of course, is not entirely the point. It’s nice to hear people outside the industry talking about magazines. It’s a reminder that print, and magazines in general, still have an impact on social culture. It’s also nice to see something other than a wall of smiling, airbrushed models and celebrities at the newsstand—something people can react to.

Hopefully for an ailing industry, that reaction will include buying.