As Magazines Seek New Footing During the COVID-19 Crisis, the Newsstand Tries to Hang On
With fewer retail options, what does the future look like for magazines' past? 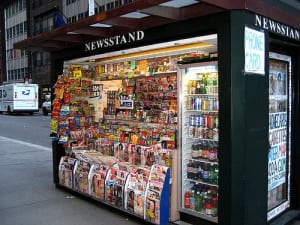 For most publishers, the newsstand business has become ancillary. But prior to The Great Recession, America’s top 500 magazines delivered nearly 350 million copies to newsstands across the country.

Times have changed, to say the least. That number now is a small fraction of what it once was, and for many magazine publishers, the newsstand accounts for less than 10% of overall revenue.

The drop in newsstand sales has been precipitous and consistent, double-digit year-over-year declines have been par for the course for more than a decade. Still, there have been outliers, such as good performers at Bauer Media Group with Women’s World and First for Women, as well as Meredith’s People, along with a shrinking list of other titles that are still able to generate worthwhile revenue.

But now, as COVID-19 continues to disrupt every corner of the economy, questions about the viability of the newsstand are glaring.

Initially, CEO of Bauer Media Group, Steven Kotok, suggests there was a slight uptick in sales as shoppers prepared to hunker down. Likewise, Meredith Magazines president, Doug Olson, acknowledged the same trend. But both implied they don’t anticipate that being a long-term trend.

“We aren’t sure,” Kotok candidly admits. “We wouldn’t be surprised if we saw some decline due to foot traffic.”

With non-essential businesses remaining closed in most states, Olson recognizes what was behind the short-lived uptick. “At first there were a lot of people standing in line and picking up our product,” he says. “Then about two weeks ago we saw a flattening or maybe down a point or two.”

Scott Hill, who is oversees retail sales and marketing at PubWorX, a joint collaboration between Hearst and Condé Nast, that also serves as a third-party multi-service partner to small and mid-sized publications, is very clear in his expectations for a softening of the newsstand business.

“The disruptions in air travel impacts the business significantly,” he says. “There are a lot of shops that are closed. Flights are down 80% at this point. So we’re trying to reduce print orders accordingly.”

In terms of the impact on orders overall, Hill cites Barnes & Noble as just one critical example. “They have had over 400 stores close,” he says. “That’s impacting current sales for copies that are in-house as well as future print orders. I would say the immediate adjustments and impacts are at minimum 60 days and may extend longer due to print order cycles. We may have to make some guesses.”

For Bauer, on the other hand, most of its transactional sales happen at essential businesses like grocery stores and pharmacies, which will almost certainly remain open throughout this crisis.

“We know the depth in loyalty is there,” Kotok says. “To the extent of traffic we think we’ll have the sales. We’re not sold as heavily in airports. I think the ones who depend on travel points are feeling it a lot harder.”

Here’s the rub for Kotok, and the others we spoke to: the newsstand business is symbiotic. What that means is the health of every newsstand magazine is critical to the greater good. So decreases in orders, increases in costs or disruptions in the supply chain, as well as in wholesale distribution, could create a domino effect.

“Clearly we’re concerned about retailers,” Kotok says. “They seem ok, but if other publishers were to have problems, that would affect supply chain partners who rely on them. There’s an entire ecosystem.”

On the printing side, Hill, Kotok and Olson are all optimistic. And so far they report it’s been business as usual.

“Paper seems to be flowing through the system,” Kotok says. “Printers are essential industries. The flow of information is very important in this situation. Most paper is made in North America. If it were 100% overseas it would be more stressful, but you’re always concerned about the viability of the partners you’re working with.”

Although the number of available retailers has been reduced, so far the wholesale distribution chain is also intact and Hill says he doesn’t anticipate that to change.

However, something he and Olson both addressed is the impact on rate bases.

“The short term discussions are meeting rate base, and the most efficient way to serve rate base,” Hill says.

Olson indicates that Meredith has been trying to stay in front of this challenge. “We have made a few tweaks to our SIPs business,” he says. “For example, our movie companions that were supposed to run alongside movie releases are being held back because it doesn’t make sense to run them. But we have brought things back like People Puzzler.”

At Meredith, the newsstand accounts for less than 5% of its diversified portfolio. But Olson confesses that it’s still an important piece of the business and not one the company intends on moving away from as things return to “normal.”

Conversely, at Bauer, where the newsstand is at the forefront of the business, Kotok says the company is always looking to diversify and tap into other revenue opportunities like affiliate marketing, but he’s ultimately confident in the road ahead.

“We’re always kind of working seasonally,” he says. “This is a new, sad season, and as we go into the next season we will adjust what we’re offering, but the strategy of what we do isn’t going to shift.”