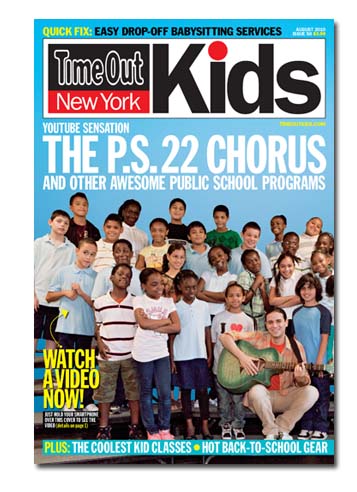 The list of magazines tapping into the virtual world of augmented reality keeps growing larger. Time Out New York Kids and Revolver magazine have recently unveiled covers that feature the budding technology.

At Time Out, the August issue of Time Out New York Kids allows readers to use their smartphones to access a video of the cover subject, the chorus from Public School 22 in Staten Island (of YouTube “fame,” covering songs by popular music artists like Lady Gaga, Alicia Keys and Rihanna). Readers first download the junaio app from AR browser and TONY Kids’ technology partner Metaio (available from the Apple App store or Android Marketplace). After holding their smartphone up to the cover, a video of the student chorus singing “One Day” by artist Matisyahu pops up on their screen. Here’s a video demonstration:

“Augmented reality, in its simplest form, allows consumers to use their mobile devices to experience print products in a new and exciting way,” says Time Out North America digital business director Marci Weisler. “An image that was once static on a page now comes to life—one that allows readers to see and hear the content for themselves.”

Last month, parent title Time Out New York worked with Metaio to utilize augmented reality, mobile and GPS technologies to create a guide to drinking establishments in New York City offering  special discounts, accessed over a user’s smartphone. The project was connected to the magazine’s “Summer Drinking Special” feature in the June 16 issue.

The issue hits newsstands July 27, the same day the record is released.

Among the other magazine publishers that have recently tapped AR technology include Bonnier’s Popular Science, Time Inc.’s InStyle, Hearst’s Esquire, and Future US’ Official Xbox Magazine and Playstation: The Official Magazine.