The Magazine Medic
An industry expert offers a critique of 'American Handgunner'. 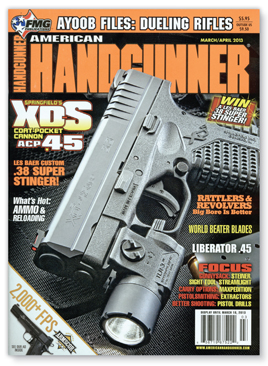 This month we propose to take American Handgunner under our care, not because it requires a tourniquet to stanch  bleeding, but rather because it represents America’s hyper-exuberant gun culture, which is so much in the headlines these days. Magazines about guns and shooting are a thriving category; this may or may not be a good thing, depending on your interpretation of the Second Amendment.

Not surprisingly, American Handgunner is brash, bold, and assertive—like a revolver pointed toward your head.  It’s an unapologetically intimidating presence. Obviously, this attitude is working just fine for the owner; the magazine has been around a long time and it is fleshy with advertising.
Does that make it a good magazine? Not by our reckoning. What it makes is a financially successful book, and we have absolutely no objection to that. However, after eyeballing it head to toe as our prospective patient, we’d advise, “Call our front desk and ask for the next available appointment.”

What We Prescribe
• The front of the book is a horror, a messy mashup between an old-fashioned police blotter (an homage?) and the National Enquirer. One has a sense that the art department was gifted with a stack of type catalogs, but no one there could settle on the few fonts that would work best in a complementary way.

• Several of the regular columnists are portrayed in each issue with guns drawn and positioned to fire. C’mon, guys. We know what this magazine is about. There is such a thing as overkill (editorially speaking, that is).

• Feature bylines should always be positioned near enough to headlines so that one doesn’t need to go searching for them—or, worse, spot them immediately adjacent to a picture of a bear (as in a recent issue), which may suggest to some readers that the big furry fella has both a first and last name.

• The editorial content is so front-loaded that Handgunner feels lopsided. The last third of the book is mere copy overflow stuffed between endless amounts of ads. Someone needs to better manage pacing. Advertisers in back are getting a raw deal.

Medic’s Note
The editor of American Handgunner—his name is Roy Huntington, and we’re pretty sure that’s not a pseudonym—speaks to his readers in a vernacular full of free-range bluster. He’s entertaining and relatable, and in that respect he’s a darn good editor. If he takes umbrage at any of the Medic’s observations, we ask that he simply ignore, not pop, the messenger.