Overall, deals for the 10 media and marketing sectors measured in the report totaled $74.7 billion in 2012, up 44 percent from last year and a five-year high. In raw volume, there were a record 1,351 sales-including a flurry in the fourth quarter as sellers raced to beat anticipated tax code changes in 2013.

"The state of the media and marketing world is very healthy," says Tolman Geffs, a co-president of JEGI. "You’ve got continued waves of innovation as emerging companies drive new forms of effectiveness and efficiency. On the other hand, you have both corporate and private-equity acquirers who are ready, able and very willing to tap into those new sources of growth."

Sharp differences exist between b-to-b and consumer media however.

Broken down by category, b-to-b media was the largest percentage mover in the group. The sector shot up 143 percent in volume and an incredible 731 percent in dollar value, but at just $411 million (less than 1 percent of total M&A activity for the year), the small sample size accounts for much of that variation, according to Geffs.

Conversely, consumer magazines represented one of the slowest growth areas measured. Volume growth (up 34 percent) trailed the market average (50 percent), and, with purchase dollars plunging 91 percent, consumer magazines were the only group to suffer a decline in value. Sales totaled just $277 million in aggregate, down from $3.2 billion in 2011.

"That was due to the absence of a few really large deals," Geffs says. "A couple large deals that were in 2011, didn’t happen in 2012. This sector has been quiet except for the occasional large transaction."

The report states that there were no consumer magazine sales this year worth $100 million or more.

Mobile media and technology broke through after stagnating last year, jumping more than 70 percent in both volume and value. The 124 deals accounted for almost $3.5 billion in 2012, and according to Geffs, those numbers will increase next year.

"Mobile media is finally coming of age," he says. "It’s now a part of the mix for any major marketer." 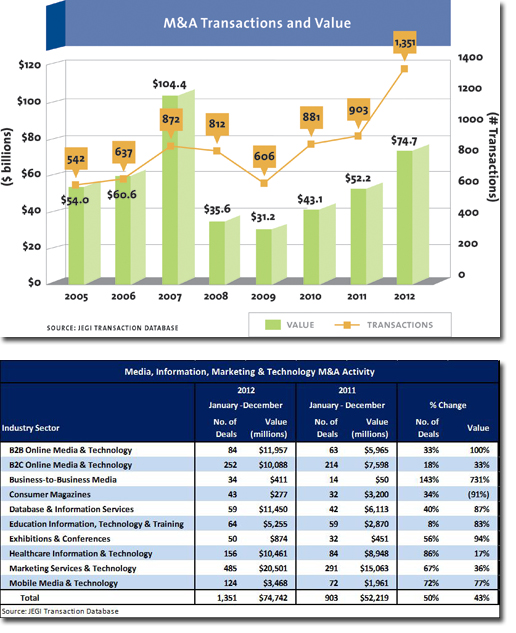