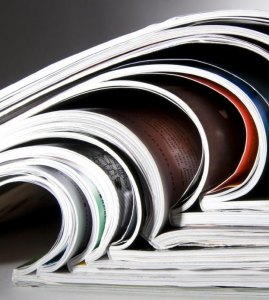 Weeks after issuing an earnings that report that revealed the company lost $295 million last year, publication printer LSC Communications is preparing to file for Chapter 11 bankruptcy, Bloomberg reports, citing “people with knowledge of the plans.”

The news comes less than a year after the company called off a proposed merger with its chief competitor, Quad/Graphics, following a Justice Department challenge on antitrust grounds.

Since then, LSC, the nation’s largest book printer in terms of market share, has looked to reduce its position in magazine and catalog printing, closing or planning to close eight manufacturing plants in order to narrow its focus on its books business. Quad/Graphics, meanwhile, has been moving in the opposite direction, as the pseudonymous writer D. Eadward Tree points out, seemingly creating two separate lanes in which the companies can maintain dominant positions unimpeded.

More immediately concerning for LSC is the need to reconcile its $893 million in debt against diminishing revenues, which declined 17% year-over-year in the fourth quarter of 2019 to $778 million.

Concurrent with the earnings report on March 2, LSC announced that as of December 31, 2019, it fell into noncompliance with its financial covenants, essentially in danger of defaulting on its loans because its debt-to-equity ratio now exceeds the maximum level permitted in its agreements with lenders. The company says it’s reached a forbearance agreement with its lenders, preventing them from taking action on outstanding debts until May 14, which would presumably give LSC time to prepare a bankruptcy filing.

Meanwhile, shareholder Sententia Capital Management—which says it holds 869,687 shares of common stock in LSC, representing about 2.6% of total outstanding shares—issued a letter to LSC’s board of directors last week, accusing management of “failing stockholders” and alleging that chairman and CEO Thomas Quinlan, in particular, “may be prioritizing the preservation of his role as CEO and Chairman over the interest of stockholders.”

“Mr. Quinlan and the board have overseen the destruction in stockholder value by over 99% since [LSC] spun out [from R.R. Donnelly] in 2016,” the letter reads. “This is not acceptable, and we believe time is short to prevent the complete destruction of stockholder value at [LSC]. Given the accelerated decline in the financial and operational picture of [LSC], it is unclear why Mr. Quinlan and the board do not appear interested in pursuing every possible path to avoid potential bankruptcy, including engaging with our nominees, who have critical restructuring, turnaround and industry experience.”

The letter points to LSC’s adoption, also announced on March 2, of a shareholder rights agreement (commonly referred to as a “poison pill,” meant to protect a corporation’s board of directors against a takeover bid), as well as the delay of its annual stockholders meeting, as further evidence that the board is placing its own interests ahead of those of investors.

Sententia has put forth its own set of six nominees for election to LSC’s board, if and when the shareholder meeting takes place, including its founder and general partner, Michael Zapata.

“Since the termination of its merger with Quad Graphics last year, LSC has acted quickly to take decisive action to manage LSC’s operational and financial position. We have narrowed the Company’s strategic focus and are aligning our manufacturing platform to address the significant structural changes in the industry. Our primary objectives are to run our solid core businesses successfully and profitably while also using our strong, longstanding client relationships to aggressively pursue new business opportunities.”

“LSC has a diverse and experienced Board consisting of eight directors, seven of whom are independent, and all of whom are seasoned leaders who possess significant experience relevant to the Company’s business. The Corporate Responsibility & Governance Committee regularly reviews the composition and size of the Board in order to ensure that it has the right mix of skills and experience to support and advise LSC.”