A Look at the ‘Skiff’ E-Reader
A reader tailored for magazines debuts at the 2010 CES in Las Vegas.

The Skiff Reader [pictured below] features an installed e-reader service and access to a digital store where consumers can wirelessly buy their newspaper and magazine content. The device is a quarter-inch thick with an 11.5-inch screen.

A spokesperson for the company declined to reveal pricing for the device and content, but said that content from "multiple partners" would be available when the Skiff store goes live later this year.

The company, by the way, is touting the device as the "first e-reader optimized for newspaper and magazine content," presenting a strange wrinkle in the plans of Next Issue Media, the big-publisher joint venture which includes Hearst  among its five stakeholders.

"The Skiff Reader’s big screen will showcase print media in compelling new ways. This is consistent with Skiff’s focus on delivering enhanced reading experiences that engage consumers, publishers and advertisers," said Skiff president Gilbert Fuchsberg in a statement reminiscent of Next Issue Media’s own plans for its reader and Web-based storefront service—both of which have yet to be named.

Sprint will be handling 3G connectivity and will offer the device for sale in 1,000 of its retail stores and on Sprint.com.

Skiff boasts a full touchscreen that utilizes a flexible, LG-produced e-paper display rather than glass. While the screen is flexible—a characteristic that the company says makes it more durable—the device itself is not.

The debut will surely set the stage for a competitive next couple of years as publishers and manufacturers wrestle for e-reader market share—particularly in the magazine and newspaper industries, which have yet to find a device that compliments both layout and business models.

Skiff says it is working with other consumer electronics manufacturers to integrate its service, something Next Issue Media is also planning to do. 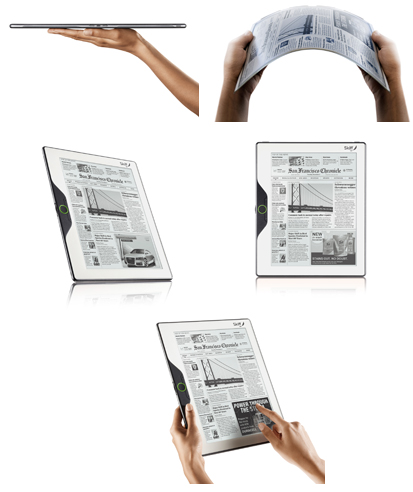