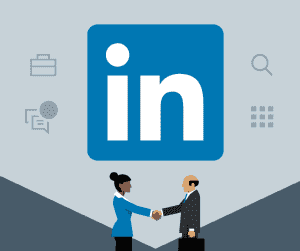 Long maligned as the domain of headhunters and contrived self-promotion, LinkedIn has a tendency to serve as an afterthought in publishers’ social strategies, a platform familiar enough to be acknowledged but far less important than Facebook, Instagram or Twitter.

Yet unlike those platforms, LinkedIn—whose active users continue to increase in number—has not been the perpetrator of many ill-fated media pivots, nor has it drawn intense scrutiny from regulatory authorities.

And with good reason—to date, Forbes‘s LinkedIn account has amassed over 13 million followers (or about 2% of LinkedIn’s entire global user base), an audience that far surpasses that of any other news outlet and even edges out the follower counts of LinkedIn giants Amazon, Apple and Microsoft.

To better understand Forbes‘s success on the platform, as well as determine whether other publishers should be diverting more of their efforts there, we turned to Gleason for some advice. Here’s what we learned:

Trust what your audience tells you

Even though Forbes has a massive audience on the platform (bigger than its Facebook and Instagram audiences combined), Gleason says she resists the temptation to use LinkedIn as a distribution channel for content across all of Forbes‘s verticals, instead focusing solely on the topics that followers have indicated they want—content focused on leadership, careers or entrepreneurship.

“First and foremost, my strategy involves looking at data always, and that’s what I saw when I came into LinkedIn,” she tells Folio:. “People are very vocal about what they want to see and what they don’t want to see, and it’s also, in my opinion, the least-trolled social media platform there is. So you can really trust the audience and listen to what they’re saying.”

Undoubtedly, the conversation on LinkedIn tends to be more earnest than on Facebook or Instagram, less snarky than on Twitter, and more “troll-free” than on any of them. Gleason speculates that this is a benefit of LinkedIn’s inherently professional environment. There is virtually no anonymity, and users are representing not only themselves in the context of their careers, but in many cases, they’re representing their employers as well.

“It’s really a genuine experience on LinkedIn,” she says. “On other platforms, there’s a lot of tagging and emojis, but on LinkedIn you can really see a conversation form and it’s a lot more engaging.” 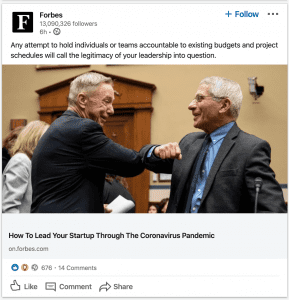 One lesson Forbes learned in 2016, says Gleason, is that LinkedIn users really aren’t coming to the platform for news—especially political news—but that’s not to say they’re news-averse. Last year, Forbes launched a breaking news desk, staffed with new hires and aimed at providing stories that take what editor-in-chief Randall Lane calls a “Forbes-ian” view of the stories dominating the news cycle.

“While we want to make sure we’re giving [the news desk] visibility across our platforms, on LinkedIn it wouldn’t necessarily work as well,” says Gleason. “But in situations like the news that came out of WeWork, I think those types of things perform really well because it’s work- and organization-related. So while it’s still newsy and we can publish it everywhere, we can spin it in a way to make it work on LinkedIn.”

If one of Forbes’ editors publishes a story that Gleason’s team thinks will perform well on LinkedIn, she says, that editor will quickly publish the link on their personal LinkedIn page, and then the social media team will pitch it to LinkedIn’s editors to feature on their “news and views” tab.

“We’ve found that when we can spin a story that other outlets are covering in a very Forbes-like way, that’s what will be picked up on LinkedIn or also on Facebook’s news tab, which is currently still in beta,” she says. “We do the same with Apple News and Flipboard.”

“Video is king on social media all around,” says Gleason, and LinkedIn is no exception.

When LinkedIn first launched a native video format in 2017, Gleason says she saw an opportunity to capitalize on video content that was already performing well by cutting it into “bite-sized, text-on-screen video content.”

“We saw over 500% growth in video views from 2018 to 2019, just from adding text-on-screen videos related to tips, things like how to makeover your résumé, how to dress for interviews,” she said. “That’s where we’re really focusing right now.” 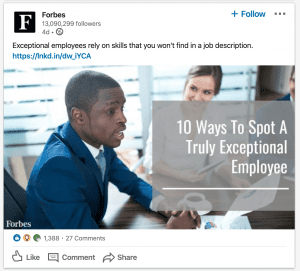 Beyond video, Gleason says, posts that include title graphics perform much better than posts that don’t.

“It’s not a summary, it’s not even really a sentence, but title graphics tend to garner more engagement than just a regular image,” she says. “We saw that really help us with both our engagement and our click-through rate.”

Take it easy on the hashtags

“We haven’t seen hashtags drive a lot of engagement,” Gleason says. “We want to make sure that when we do use hashtags, they are relevant to the brand or a summit or a list that we are launching. I don’t want to be a brand that cries hashtag.”

While they’re posting throughout the day, Gleason’s team concentrates on the morning and evening commuting hours, as well as lunchtime in the early afternoon.

“We find that people aren’t really so engaged in the middle of the workday, and then the weekend is more for inspiration, rather than news or advice,” she says.

Be efficient, but not lazy

Gleason says the social suite Sprinklr has been invaluable in terms of scheduling posts, measuring engagement and listening for trends, but that it’s still worth the time and effort to write unique posts for each platform.

“My one pet peeve is cross-posting across all platforms,” she says. “Do not do that. It doesn’t look good for the brand, it doesn’t look like you’re putting thought into the post or thinking about your audience. You’re not really catering to them by doing that, and readers can tell, for sure.”

While acknowledging that paid social—which Forbes most often uses for branded content or to promote its editorial franchises and events—doesn’t fall entirely under her responsibilities, Gleason notes that two things that make LinkedIn unique as far as social networks go are the diverse age range of its users, and the fact that brands can break down their audiences based on their seniority levels and how far along they are in their careers.

“That can really help with certain things, like our summits, if you can put money behind those posts and target them to the demo you’re trying to reach,” she says. “I don’t think any other platform has that job-level insight.” 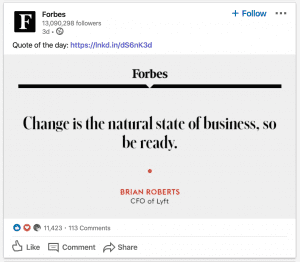 While much of Forbes‘ LinkedIn strategy involves repackaging existing content in ways that appeal to users on the platform, such as daily “Quote of the Day” posts that link back to articles on its site, Gleason says the brand is moving towards creating more content specifically for social platforms.

“Social media really isn’t distribution anymore, it’s more of a destination,” she says. “We’re trying to use it less to just post what our newsroom is working on, but to work with our newsroom to tell them what would really work well on LinkedIn, and then working with our video team to help us produce that.”