Life After Doubledown
A year later, an editor reflects on his time at closed down Wall St. publisher. 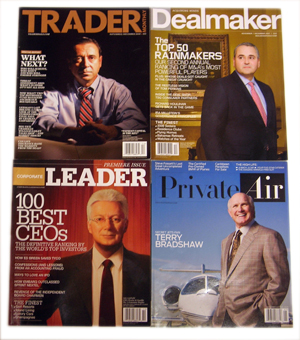 I remember it well. I was there.

While the fall of Doubledown was slow, painful and embarrassing, the experience of working there as an editor is one I view with great fondness. My colleagues were hardworking and smart, and I got to meet and interview dozens of very important people on Wall Street.

The near economic collapse during the fall of 2008 only accelerated the downward spiral that had begun in earnest months before. After the June departure of Rachel Pine, the woman who single-handedly built the publisher’s brands with tremendous success, it was hard to maintain momentum. At the same time, the “Working Wealthy” was quickly becoming the “Unemployed Upper Middle Class.” With high-end consumers dwindling, there would be no more high-end ads. No high-end ads, no revenue. No revenue, no paychecks. No paychecks, no employees. No employees, no company. What about subscription revenue? The magazine was mostly given out for free, so no dice there.

On January 30th, 2009, the company failed to meet its full payroll, despite having been slashed dramatically just two months prior. Like an airline pilot, I had been “furloughed” as an associate editor, while several of my colleagues were getting by on half pay. I remained faithful though, working for free coffee and snacks at the office in hopes that a turnaround was near. But after my bi-weekly paycheck failed to hit my account that morning, I dragged two duffle bags to work to clean out my desk.

The following Monday night, president Randall Lane sent the staff an e-mail declaring that the company’s credit line provider would “no longer fund our working capital” and that operations would cease “effective immediately.” We all said our goodbyes the next day, and got together a few weeks later to drown our sorrows at a downtown Manhattan bar. Soon after, the company declared Chapter 7 bankruptcy.

Despite its sad demise, I view my time at Doubledown with great professional satisfaction, and refuse to disparage any of my former colleagues. Enough people have taken shots at each other already, so I’ll keep my thoughts to myself. If anything, I wish I had started with them earlier.

I got on board toward the end of Doubledown’s existence—in January 2008, with the credit crisis firmly in play. I missed out on most of the lavish parties that the magazine was known for and also the chance to write more puff pieces on top traders. Thankfully though, I had avoided the media fiascos involving young traders Tim Sykes and Zack Michaelson.

Prior to Doubledown, my career to date had been in foreign exchange trading, with a short stint as a film crew member in between jobs. I had grown up in a town where half my friends’ fathers were bond traders, and along with my recent experience for a fledgling broker, I had plenty of finance tales to tell. Somehow I convinced Trader Monthly’s executive editor Rich Blake to let me do so.

To show just how much of a jump this was for me, my first project for Trader Monthly was putting together the ever-controversial Trader 100 list. Just a few months prior, my big task was servicing a $10 million forex managed accounts program. Now I was debating PR men of multi-billion dollar hedge funds about whether or not my compensation estimates for their star managers were correct. These numbers ranged from as high as $3 billion+ to as low (low??) as $75 million. Talk about going from pikers to producers! No wonder everyone from investment banks and MBA programs wanted to work at hedge funds. After all, where else could you make $100 million a year?

After Lehman went bankrupt, Merrill was sold, and TARP was passed, the most bull market of bull market publications could not last for long. When one of my colleagues asked me in late 2008, “Chris, did you hear about Citi? They’re laying off FIFTY THOUSAND PEOPLE!” I knew in my heart it was over.

After the shut down, everyone from the Doubledown diaspora hit the ground running, despite being bitter over lost pay and abrupt unemployment. A handful had gotten new jobs right beforehand, including Web guru Todd Tarpley at Nielson Business Media. The rest of us immediately reached out to old clients, sources and other publications, securing short-term freelance and consulting work.

Among my editorial colleagues, we have parlayed our experience at Doubledown into great new ventures. I have been freelancing, helping ghost write and edit two books, and have been covering hedge funds as a contributor for AR magazine. My mentor, Rich Blake, published a book and is now a blogger for Reuters HedgeWorld. My cubicle buddies who covered travel and lifestyle, Nick Kolakowski and Cristina Velocci, write for eWeek.com and Time Out New York, respectively. Scott Eden and Ty Wenger ended up together at TheStreet.com. Leah McGrath Goodman is still successfully freelancing and just finished a book about the New York Mercantile Exchange. And though she left in early 2008, former editorial assistant Teri Buhl is now the hedge fund beat reporter for the Greenwich Time, the equivalent of being an auto industry reporter in Detroit.

And, finally, Randall Lane has secured a book deal, a memoir entitled “The Zeroes: My Misadventures in the Decade Wall Street Went Insane.” I guarantee you that all of my ex-colleagues are anxious to hear his side of the story.

Though as proud of my colleagues as I am, and how I still yearn for the bubble days, I’m still waiting for that last paycheck.