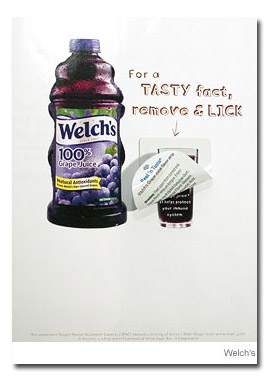 It’s an historic acid test—the ad represents the final frontier of sensory marketing in magazines to be attempted by Madison Avenue.

How long before we see these in magazines ads? My guess—they’re already on their way.

What I’d really like to see, though, is a magazine’s editorial team embrace the available sensory technology. For example, what if you were, say, reading a 29-page Vanity Fair article on, say, the war in Iraq in which you could open a flap and actually smell Baghdad? Or how about lathering Sports Illustrated’s baseball preview in pine tar? Or … what do you think?

[NOTE: Leave your best idea for an editorial sensory project in the comments section below.]