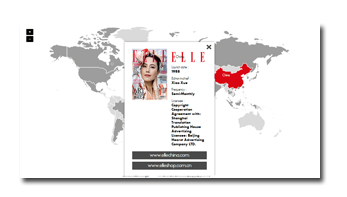 Lagardère Active, the owner of the Elle brand, has created a new digital platform to promote the Elle International Network, including a website, mobile site, Facebook page and Twitter account. These combined digital tools connect with the websites, mobile sites, applications, pages and accounts of the 43 international editions of Elle and also promote Elle‘s media and events worldwide. By sharing international and local news, promoting global and regional initiatives and highlighting the operations of the different editions, the new Elle platform aims to drive traffic locally and to further develop its global audience.

Internationally, Elle has 34 websites, 2.6 million Facebook and 3.5 million Twitter followers. However, as Valéria Bessolo Llopiz, International Director of Elle points out, each is managed by the local edition. "When we realized that," she says, "we thought it would be great to provide a centralized place where you could see whatever exists on the Elle brand anywhere." Visitors to the Elle international site can click on a world map that pops up the most recent magazine cover from that local and also provides direct access to that country’s Elle website and social networks. Llopiz says, "We want to gather all of the local communities into one worldwide community and maybe show some people who wouldn’t have seen them all of the local websites."

This initiative also combines each of the feeds from the many social streams into a unified Facebook and Twitter account to expose Elle readers to the wide range of content and interests represented by the brand globally. It also provides a place to promote Elle initiatives that appeal to the global audience, such as the Elle International Beauty awards in which12 products won an award across 40 countries.

The International initiative involved "absolutely no advertising," according to Llopiz who says "the main goal is to promote the local websites and social accounts within the countries" and to demonstrate the reach of the Elle brand.