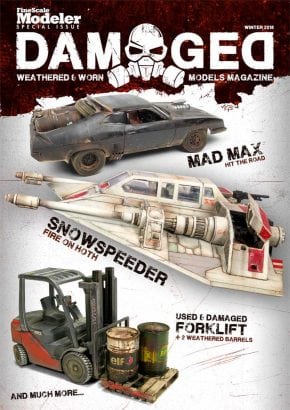 Hobby publisher Kalmbach Media and Spanish-based hobby modeling and media company AK-Interactive have entered into a partnership this week where Kalmbach will serve as the exclusive North American publishing partner for AK-Interactive’s Damaged, Weathered & Worn Models magazine. The modeling magazine will have its North American launch in November and Kalmbach will print a total of four issues over the course of the next year.

Damaged is a new, quarterly publication from AK-Interactive’s brand Abteilung 502 and is on its fourth issue. At 80 pages, its North American cover price is set at $9.99, compared to the cover price of €4.95 ($5.79) in Europe.

In addition to publishing and distributing Damaged in North America, Kalmbach will also develop a digital presence for the magazine’s content as well as promote Damaged and other AK-Interactive products across its print and digital platforms, which see a total reach of 35 million.

The new magazine will be a familiar addition to Kalmbach, whose own portfolio of modeling hobby publications include FineScale Modeler, Scale Auto, Model Railroader and Trains.

“[AK-Interactive] came to us with the challenge of growing awareness for their brands in the North American market,” said Kalmbach CEO Dan Hickey in a statement. “With our connection to passionate modeling enthusiasts, FineScale Modeler and Scale Auto are the undisputed leaders in that space. Our ability to reach this audience with the content and products they need is unmatched.”

According to the Hobby Manufacturers Association, the model hobby industry in the United States alone is expected to exceed $1 billion in annual sales this year.