Is it Time for Time to Scale Back its Frequency?
A case for going—gasp!—quarterly. 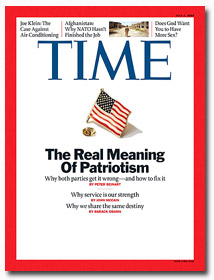 Does anyone here remember that wonderful year 1996, when Time magazine did a redesign that caused a reader revolt? Well, I remember it well. One element in the failed repositioning of the newsweekly was a recent staffer, Joel Stein, who was the magazine’s novelty item just before the collapse. Stein specialized in news lite—hot dog eating contests, stuff like that.

When the magazine regrouped, Stein was missing in action.

Now, under the editorship of Richard Stengel (who signs his Editor’s welcome column "Rick"), Joel Stein is not only back; he is riding higher than ever as the magazine sinks to new lows. In a recent issue (July 7), he writes The Awesome Column on the ordeals of getting an album by Guns n’ Roses lead singer Axl Rose by downloading nine tracks from a blog. "I play it all the time, everywhere," writes Stein. "This is despite the fact that I don’t like Guns n’ Roses or heavy metal. Which is far outweighed by the fact that I really like having things that everyone else wants." (Time directs readers to Stein’s "track-by-track review" at time.com/gnr). "Even if piracy seems unfair, megafans aren’t going to stop themselves," Stein concludes. "Record companies will have to learn that giving music previews away—just as Google gives away its searches—in exchange for ads, sponsorship and merchandise is the new business model."

Elsewhere, in the Life department of the same issue, Stein reports on another big news event: McDonald’s new Southern Style chicken biscuit on the breakfast menu. I mean, we aren’t trivializing the news are we? I mean, like, what’s more controversial in journalism today than chicken for breakfast. "But it is good," Stein says. "The biscuit is soft and buttery, and while I don’t love chicken, this is at least clearly decent, non-McNugget chicken, boldly presented without sauce."

Look, Stein is Stein. I’m not picking on him so much as I am wondering why Time turns over so much of its space and its reputation to someone so frivolous and unfunny (though they are probably rolling in the aisles at the magazine). Joel Stein isn’t the problem here. The real problem is Time’s judgment from on high.

Elsewhere in the Stengelized Time we find two "new" features—"The Skimmer," which reviews books briefly, then recommends either “Read, Skim or Toss”; and "Pop Chart," a seismograph-like charting that labels people and events as Shocking, Predictable, or Shockingly Predictable. Both of these departments resemble longstanding features in New York magazine—mini-reviews that advise readers to Buy the Book, or Wait for Paperback; and the fabulous Approval Matrix, a "deliberately oversimplified guide to who falls where on our taste hierarchies": Highbrow or Lowbrow, Brilliant or Despicable.

Meanwhile, while the world winces, Time’s lead story on the oil crisis is "10 Things You Can Like About $4 Gas." "Pricey gas is mostly just economic pain," is the subhead. "But beyond the agony at the pump, life is getting a little better in ways we may not notice." Those little unnoticed things include (duh) less traffic, less pollution, fewer traffic deaths, and less obesity. "People walk more, bike more and eat out less when gas is pricey," observes astute Time journalist Amand Ripley (with additional reporting by Maya Curry).

OK, so what do we have here? "Business, more than any other occupation is a continual dealing with the future," observed Henry Luce, Time Inc.’s legendary founder. "It is a continual calculation, and instinctive exercise in foresight." Ah, yes … if only Henry were around today, he would die.

U.S. News & World Report is cutting its schedule to biweekly. And now Time, the greatest newsmagazine ever, is in freefall. Readers are bailing, advertising is down (some 30 percent or more when last checked), and one senses that staff resumes are being updated as this is writ. Clearly, the redesign, relaunch and restaffing has been a disaster. The editorial marketing from on high reminds me of the launch of the "new Coke." (If you remember 1996, you will remember that debacle, too.)

Accordingly, here are my predictions for the coming six months:

1. Time magazine to go quarterly. Editorial director John Huey announces "Rick" Stengel to edit new publication, Time for Kids!
2. Joel Stein leaves "to pursue other interests," including a Hollywood development deal with Adam Sandler.
3. Fox Entertainment and Rupert Murdoch Productions announce purchase of screenplay "Time Out—Way Way Out" by Joel Stein. Steve Carrell stars as the befuddled editor who plots to destroy a magazine—and get kicked upstairs, finally able to get that second home in Switzerland—by dumbing it down with frivolous writing and no reporting whatsoever. Jim Carrey co-stars as the slacker columnist who can’t believe he is paid ("plus T&E expenses!") for writing such crap. "My parents still don’t know what I do for a living!" he admits in a tender moment with mentor (Dom DeLuise in a cameo role). When the magazine fails, Carrey sits by the phone awaiting job offers. "I’m thinking maybe The New Yorker," he tells the bartender.

Director Mel Brooks says he is considering a soundtrack by Guns ‘N’ Roses for the movie. "Even though I don’t like heavy metal, it works nicely with the ‘way out’ theme."