iPad Usage Varies Between Consumer and IT/Business Professionals
73 percent of professionals use their iPads for news consumption.

As expected, the iPad (now used by 60 million worldwide) is directly affecting how consumers are buying and digesting media. However, in a recent study released by IDG Connect, data shows that iPad usage varies with the audience demographic. While the tablet is plugged as a “lean back” device by many in the magazine industry, the study shows that tablet use by IT and business professionals is different than the average tablet owner.

A McKinsey study published in November showed that 62 percent of iPads never leave consumers’ homes, and 70 percent of usage occurs in the living room. The IDG Connect study shows the 79 percent of respondents consider iPads a truly mobile device, taking the tablet on the road with them.

The study, which surveyed professionals in Africa, Asia, Australia/New Zealand, Europe, Middle East and South American in addition to North America, shows that 76 percent of study participants use the iPad for “reading”. Following close behind is the 73 percent of users who consume news on the devices.

44 percent use their tablets to engage with social media.

Professional use of the iPad ranks higher than personal among the surveyed IT and business professionals. 54 percent always use the iPad for work communication, compared to 42 percent who use the tablet for personal communication.

Among the top uses for iPads, entertainment comes in as a low priority. 59 percent of survey respondents “sometimes” pick up their tablets for entertainment purposes, and only 31 percent “regularly” use the iPad for recreation.

While magazine use was not specified in this study, almost 75 percent of survey respondents said “owning an iPad has reduced the frequency with which they purchase newspapers and books”.

From this number, the company predicts, “For advertising-funded media (newspapers and magazines), the challenges are particularly substantial. Readers who can afford iPads tend to be more demographically desirable than those who cannot. The danger for media owners is that migration to tablet consumption will ‘top-slice’ their audiences, denying them the opportunity to monetize their most valuable readers via print advertising, which remains relatively lucrative.” 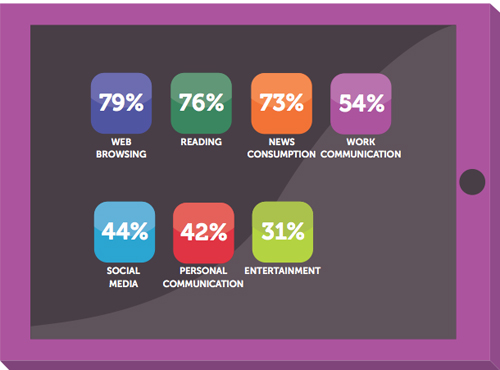