Interview to Unveil Redesign
Magazine says it is first to use ‘foil-and-ink’ cover treatment. 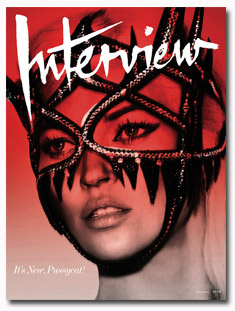 Interview, the Andy Warhol-founded magazine that has seen a number of editorial and staffing changes since its longtime editor-in-chief, Ingrid Sischy, left earlier this year, is set to unveil a redesign next week.

The new-look Interview—hitting newsstands August 26—is bigger (13” X 10” from the current 12” X 10”) perfect bound and uses a heavier stock. Most notably, the September issue features a striking foil-and-ink cover—the first North American magazine to do so, the company says. It will carry 140 ad pages, a 10.8 percent increase over the September 2007 issue, which carried 128.

In June, Brant Publications laid off four employees as part of a restructuring effort. Brant, which also publishes Magazine Antiques and Art in America, employs about 130 people, up from less than 85 in January.

Sischy, who had served as Interview editor-in-chief since 1990, left the magazine in late January after former Brant Publications co-owner Sandra Brant decided to sell her stake in the company.