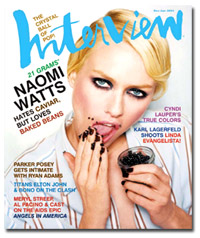 Brant Publications, publisher of Interview magazine, has laid off four employees as part of a restructuring effort, the company has confirmed.