The survey was conducted by IAB and PwC U.S. as part of the ongoing IAB Internet Advertising Revenue Report—the IAB sponsors the report, which is independently conducted by the New Media Group of PwC.

As the chart below shows, quarterly digital revenue growth has been steady since 1996, and has grown by more than $4 billion since 2007. 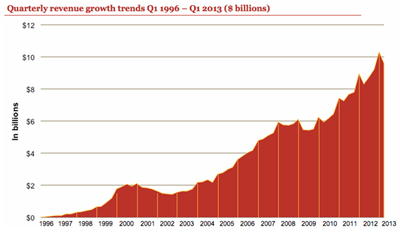 While overall digital ad revenues are up, the number of ways brand marketers are spending their dollars is also changing. According to a March 2013 survey that was released late last month by the Association of National Advertisers, 65 percent of the 20 major U.S. brands surveyed said they were increasing their investments in mobile, eMarketer reports.

The data shows that mobile is the fastest growing segment of digital spending—only about 10 percent of those surveyed said they planned to decrease mobile spend. Social is the second fastest growing segment with 55 percent of the U.S. marketers surveyed saying they planned to increase their social spend. No advertisers reported decreasing their budgets as it relates to social spending.

Video is also gaining speed, with two out of five brand marketers saying they planned to up their investment in video. 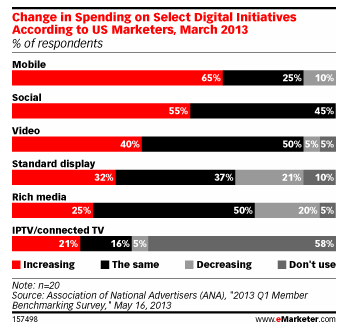