How Three Publishers Are Retooling for Growth
Three very different publishers share how they are remaking existing products.

New opportunities abound for publishers but with that comes new challenges, including determining what’s worth the time and resource investment—and what’s not. Here, three very different publishers outline how they’re reinventing existing products.

Atlantic Media has invested heavily in remaking its flagship brand The Atlantic, as well as National Journal, and so far, has been rewarded on both fronts. Now the company is turning to its b-to-b division, Government Executive Media, with a plan to double revenue in five years.

Shortly after joining Government Executive in February, CEO Peter Goldstone sat down with Jerry Shair’s Boiling Point ideation company to map out a plan. “We see five to seven opportunities around digital media, education (business learning), print, events, data, research and analytics,” says Goldstone. “Some platforms we already have, others we will be developing. We can take our horizontal play and go into other niches, or build out a vertical by audience or topic.”

The first step is investing in (to the tune of six figures) and redesigning Government Executive (conducted by celebrated design firm Pentagram, which also handled redesigns for The Atlantic and National Journal). “Even though we have an incredible web platform, the audience demographic is really 40 and 50-year-old people in high levels of government,” says Goldstone. “They still rely heavily on the magazine, which we felt was a bit neglected.”

A website redesign follows in January. While he wouldn’t reveal hard numbers, Goldstone says that digital accounts for 65 percent of GE’s overall revenue.

Beyond the magazine and website, the core for Government Executive Media is the Government Business Council, a research intelligence division that launched in 2007 to offer case studies to top GE advertisers. Services include research, content marketing, lead gen and events.

“We can go to a company that wants proprietary research on a select topic—say cyber security—and create a research engine that funnels into custom content which can be used to create custom events,” says Goldstone. “Sponsors get assets from research and custom events which extend into webinars and white papers and other content marketing services.”

Revenue for Government Business Council has grown more than 400 percent to almost $4 million, with research accounting for more than $1 million alone. “It’s also brought an additional $2 million to $3 million in media payments,” says Goldstone. “We wouldn’t have those media payments without the research and data delivery upfront.” 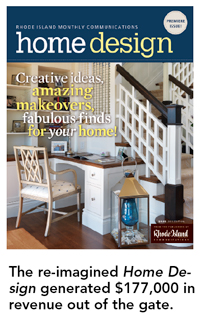 The most successful brand extension for regional title Rhode Island Monthly is actually a relaunch (and repositioning) of its spin-off shelter book, Home Design.

“We, like most in the regional business, jumped on the real estate bubble and had a bi-annual home book,” says president and publisher John Palumbo. “When the economic tsunami hit it, the magazine became impossible to publish—even as an annual—profitably. In the ensuing two years we kept hearing from our home advertisers in Rhode Island Monthly just how awful the higher end of the category was business-wise.”

Associate publisher/sales Kieran Keating came up with a concept for a marketing-friendly “home design guide” that would expose the higher end architects and designers builders. “It was not advertorial per se,” says Palumbo. “We had a special publications editor who would write about the projects featured in the magazine objectively—the advertiser had no right of approval.”

Rhode Island Monthly also blew up the original distribution model (which included newsstand and controlled distribution to a “high earner list”) and mailed it directly to subscribers.

While the publisher was worried it might cannibalize the home business for Rhode Island Monthly, Home Design more than doubled modest budget expectations, generating $177,000 in revenue in a still-struggling economy. “Keep in mind this market has experienced one of the higher unemployment rates in  the country,” says Palumbo.

Advertiser packages ranged from $1,950 to $9,750. “We launched with a high-end party for the advertisers,” says Palumbo, who adds that some of the advertisers monetized their financial investment multiple times within the first week the book was out.

Rhode Island Monthly is now looking at an e-newsletter for House Design, similar to what it does with its bridal book, Engaged.

Last year, WATT Publishing blazed a trail with the launch of the WATT Dashboard, a subscription service offering data for its select agri-business markets.

Today, however, WATT has dropped the subscription model in favor of an aggregated, sponsor-driven Market Data section on WATT AgNet.com. “Ultimately, some of the best business decisions are knowing when to say ‘enough,’ and WATT Dashboard never met the business goals we had targeted,” says director of custom media Jeff Miller. “In my opinion, data is data but unless you have commentary on the data it’s not of value, especially for a monthly subscription. We did not have the editorial horsepower for consistent and intelligent commenting on the data. We thought about hiring but until we got to a tipping point where we could reinvest in the product, we elected to table it.”

Instead, WATT decided to turn to an aggregated data model by working with MarkLogic which “scrapes” relevant data. “I hate the term ‘scrape,’” says Miller. “We set up parameters for the content we’re looking for, it’s not a raw scrape, it’s a targeted scrape.”

Information includes USDA data such as grain prices and grain futures, which are automatically updated and formatted for the AgNet CMS. Charts can be printed out for presentations and the dashboard is formatted for PDA viewing (although not iPad or iPhone, since the charts are made with Flash).

Eventually WATT will require registration to access this data (although it will remain free). “We wanted to tap into the growing necessity for our audience to have one source of reliable information and be able to download it and use it for presentations and reports,” says Miller. “Eventually we’ll gate this information and require registration to access it.”