How Not to Promote Your Magazine’s Special Issue
Step 1: Sending e-mails with bad, sexually-charged puns to media reporters. 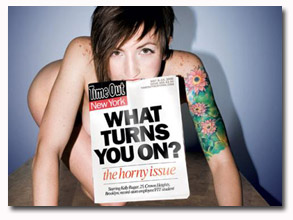 Here’s an e-mail I received from Time Out New York’s publicist, presented without comment:

Feeling hot and bothered? So are we, and we’ve got the boners to prove it.

It’s worth noting that Time Out New York’s former editor, Brian Farnham, speaking at the 2007 American Magazine Conference, said he had one goal in mind when putting together the 2007 sex issue, his second as editor: Cancelled subscriptions.

"If you do a sex issue and no one cancels, you’re probably not doing your job," Farnham said.

It’s also worth noting Farnham is no longer with the magazine.