How Much is a Magazine’s Content Worth? Part One
One niche publisher's personal relationship with general interest print brands. 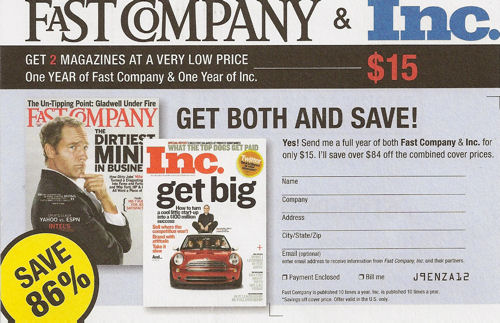 Despite most days feeling like someone pushed the self-destruct
button and we’re all scrambling for the escape pods, I
will always love them, especially and above all, the printed format.

I’m no fetishist or luddite, though, and while I tend to favor
print, my definition of a magazine is platform neutral. I’ve worked in
magazine publishing for over 15 years now—from audience development
to advertising sales, freelance editorial to events planning, corporate
to D.I.Y.—and stand firmly with the digital generation that’s
purportedly out mugging elderly newspapers in broad daylight, and
striking fear in the hearts of cowardly and superstitious magazines in
the middle of the night.

Seeing subscription offers like the one above for Fast Company and Inc.—two solid print magazines devaluing their editorial content at only 75 cents an issue while simultaneously making it all available for free online—I think that the death of the current ad-supported model is inevitable and, arguably, a good thing.

Portability and endurance are two
theoretical advantages print magazines have over their digital
competitors, but the ability to deliver engaging, focused and original
content cheaply and on a consistent basis is much harder to do in print
than it is online, where expectations are lower and the exchange rate
is more favorable. Paradoxically, magazines’ own online presences are,
more often than not, commensal partners at best, if not outright
parasites.

In a typical ad-supported print magazine, even the best editorial
intentions are constricted by the costs of printing and postage which
are subsidized by the diminished and ever-fluctuating advertising
revenues that ultimately dictate page counts. They’re further
contradicted by mixed messages about the actual value of the content
itself, as in the insulting subscription offer above.

My Relationship with Print Brands

I was doing some Spring cleaning this weekend, and part of it
involved going through the ridiculous piles of magazines that had
accumulated around the house over the past several months—a wide
range of titles reflecting personal interests, competitive research,
random newsstand browsing and "forced-free trials." While sorting them
into save and recycle piles, I was struck by how many of them I hadn’t
flipped through yet or even recalled pulling out of the mailbox,
including some of my supposed favorites.

The pile of unread copies of the Atlantic was perhaps the most galling. I often note it as one of
my absolute favorites, and
yet its exemplary collection of well-written, long-form journalism
rarely gets more than a quick flip-through when it shows up in the
mailbox, set aside to read when I have more time that never seems to
materialize.

Coincidentally, I also subscribe to Andrew Sullivan’s Daily Dish
(via Google Reader and, for a short while, on Twitter), but the volume
of content he generates can be overwhelming, and I’ve found myself
lately only skimming headlines and rarely clicking through to read full
posts. While his purposefully fleeting bits
of data, links and reflexive commentary are of a higher quality than
some magazines’ feature articles, they’re usually buried under his
steady stream of content by the end of the day, unlikely to ever be
seen again, except possibly via a relevant Google search somewhere down
the road.

I ended up saving most of the unread copies of the Atlantic,
fully expecting to read and enjoy them in the near future, partly  from having the Atlantic brand and what it represents steadily drummed into my head every day, courtesy of Sullivan and Ta-Nehisi Coates‘ hyperactive RSS feeds.

Meanwhile, included in the recycle pile were several copies each of New York, W and Wired, three magazines I started receiving, unrequested, out of the blue a while back. New York and Wired weren’t totally unreasonable guesses based on surface demographics—I’m assuming they both pulled me from the Atlantic’s mailing list, or possibly the New Republic’s—but I actively hate the former’s editorial focus, and the latter is
an occasional newsstand pickup whenever the cover looks interesting. W, though, made absolutely no sense at all and represents the kind of junk mail
"audience development" that fluffs up far too many magazines’ mailing
lists for advertisers’ benefit—missing rate base means make-goods and
deeper discounts—and ultimately hurts them both in the end when
complaints about a lack of ill-defined results leads to a vicious cycle
of even lower ad rates and a further devaluing of content.

One unrequested magazine actually made it to the "save" pile, thanks to my wife. Gourmet was sent to me—almost as much of a reach as W—but after a couple issues, she was intrigued enough that we might
actually subscribe to it for real, assuming they don’t just keep
sending it to us for free.

Notably, I don’t regularly (if ever) visit any of these brands’ Web sites and wouldn’t pay to access their content online, though Gourmet at least has the potential to develop a multi-platform option that would appeal to my wife.

I’m not a fan of using one’s own habits as a benchmark, but I suspect there’s a lesson here for publishers and marketers alike: impressions have nothing to do with engagement, and in the end, engaging content appropriately packaged will find its audience.

That’s a victory for quality content curated with an emphasis on a
specific community over generic demographics, but it poses a serious
dilemma for publishers who are overly dependent on advertising and have
conditioned readers to expect to pay as little as possible, if anything
at all, to receive that content.

The one question so few publishers want to answer but can no longer avoid is, how much is their content really worth?

More on that later this week…