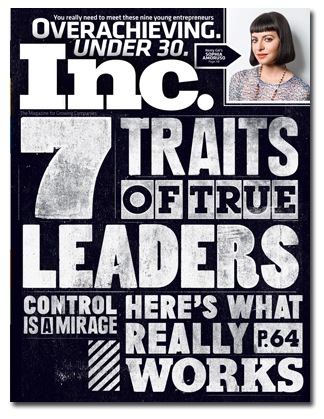 As readers evolve with the changing media landscape, print publications are reimaging their magazines to reflect the reading habits of online users—an approach recently taken by Mansueto Ventures’ Inc. magazine, which debuted its redesign last week.

“Inc., like so many other publications, is adopting a digital-first approach,” says Eric Schurenberg, editor-in-chief of Inc. “But the role of a magazine in a publishing house that takes a digital-first approach is an interesting one. It’s important to continue to think of the print publication as the flagship, and print still carries a certain mystique with important constituencies that online doesn’t. I would say that our magazine redesign totally embraces that idea.”

Schurenberg says that the redesign of Inc. includes more and larger photography, which came as a result of online behavior, since digital readers are more visual in nature.

“When people consume content they’re very visually driven,” he says. “(In the magazine) we have a number of spread pictures, and images and infographics that go across gatefolds. You can’t turn your computer screen sideways the way you can with a magazine to read a very horizontal image. The Web has become more visual and it’s raised the bar for what a magazine should do, and magazines have an advantage and an ability to compete in that realm. The fact that so much online consumption is visually driven means you have to compete harder and make sure photographs are better presented than they might have been a half-dozen years ago.”

Because the brand is incorporating more visual imagery, the publication needed to increase the quality of paper it used, something Schurenberg says is a reversal of a long-held trend.

“It underscores the notion that this is a premium part of our little publishing empire,” he says. “There is no scrolling on a magazine spread, there is no below the fold. It is what you get, and furthermore there is a lot more flexibility since there are no rails, windows or basic Web templates that you have to work with. Our redesign makes maximum use of beautiful photography, giving a lot more square-footage to it, so we needed to make sure that the paper showed it off to the best possible degree.”

In addition to increasing visual imagery, the new Inc. has pulled some online content components into its redesign. The new navigation of the magazine was “totally borrowed” from the way people navigate websites, says Schurenberg, who adds that the publication broke away from the traditional well structure.

The team leveraged its data learnings from the Web and incorporated the most trafficked content areas of the site into the pages of the magazine.

“The magazine is now broken into channels rather than the classical magazine pacing that we’re all familiar with,” he says. “It has been short stories up front and stories getting progressively longer as you get into the well and the back of the book. Each of the core channels in the magazine now have their own pacing and their own features. The magazine can now be browsed by subject matter in a way that wasn’t encouraged before.”

There are a number of columns that run across both the print and online platforms, and many of the digital pieces were refitted to be print appropriate. In addition to incorporating more online content sections into print channels, the actual content structure of the Web also played a role in the print redesign.

“We learned a lot from the Web when it comes to the design of headlines,” says Schurenberg. “The previous Inc. design had a more leisurely treatment of headlines and decks, with the assumption that you would read or absorb the whole thing all at once. What we learned from the Web was that headlines needed to be much grabbier and bolder, which is reflected in the redesign. The integration between the digital properties and the magazine is much more complete than it was before.”