How The Daily Optimized for the New iPad
Publisher Greg Clayman breaks down the process. 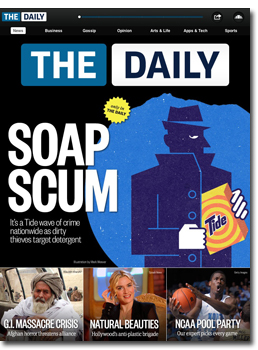 Just when publishers thought they mastered a nimble, consumer-ready app (finally), Apple releases a new version of the iPad. One of the biggest draws of the updated device is its “retina display,” which Apple marketing chief Phil Schiller describes as “3.1 million pixels with a resolution of 2048 by 1536 pixels. That’s one million more pixels than an HD TV.”

And with this news comes the rush for publishers to optimize their apps for the updated platform. Here, FOLIO: talks to Greg Clayman, publisher of News Corp.’s The Daily app, about how his team readied the publication in time for the new iPad’s debut on March 16.

FOLIO: How long did you know the retina display for the new iPad was coming, and how long did the development take?

Greg Clayman [GC]: The challenge you always have is that there are lots of rumors. On the Web, the rumor is that it will have this and this, and you don’t want heavy development to be based on rumors. That being said, lots of us lived through the switch from the iPhone 3G display to the iPhone 3S retina display. Having seen that happen once, it wasn’t hard to guess what was going to happen next on the iPad. So we though, if it did happen, what would we plan to do?

When they announced the device, the display was a big part of it, and the clock started ticking. There are a bunch of us publishers, along with many game companies, who started thinking about it early and already had a process in mind. Once the new iPad was announced, we then had ten days to optimize and release the app. That required everybody working all the time.

FOLIO: What went into the process for optimizing for the new platform?

GC: The key part is the display is that its very high-res, very high density. What that means is that your images that aren’t high-res images will look blurry; even worse is the text. The term for low-res text on a high-res screen is called janky. It looks pixelated.

The first step was text. Apple had an emulator and a software developer kit that we used to move from the former way we managed text to the current high-res way. Another component is images and pictures – with our publication in particular, there are lots of pictures. You want to immediately start producing high-res images; two, three or sometimes four times as big as they were in the past. The third thing (this is the fun challenge) is all the other graphics in the app. The chrome, the arrows, the back arrows, the tablet of contents, the logo. It is a hunt-and-gather mission.

Then we had to recreate the assets. That means going back and finding the Illustrator file that we used to create them a year ago for the first time, then looking at the image and recreating in a higher-res, higher pixel density. The next step is building all those back into the app in the right place and making sure it works.

FOLIO: Did Apple have to approve this version of this app?

GC: Every app submitted to Apple has to go through an approval process. The good news for us is that we have an app that’s already approved, and we didn’t change functionality. We let them know we were being very aggressive about updating, and Apple approved us and about 40 others by launch. During the development process, you have to build in time. On an overall scale, outside of this particular week and a half before the iPad, many people aren’t used to this development cycle. When you’re building an app, build in an extra two weeks. There’s ways to manage it.

I understand the frustration, but there is an upside to Apple’s approval proces. On Android, consumers run into problems, because apps that are in there are malware, often killing data and crashing phones. Apps in the iTunes store don’t do that.

FOLIO: Is there a very noticeable difference with The Daily on the iPad 2 versus the new iPad?

GC: There’s definitely a difference with ours. On the new iPad, text is smoother, textures are higher definition and more saturated. The whole thing looks more organic. What’s more high-res is text, images, navigation buttons and shadows, with many levels of gray. It makes for more of an intimate, organic experience across the board.

FOLIO: There’s been a lot of conversation so far about file size of optimized apps for the latest reincarnation of the iPad. Has the average size of The Daily size gone up?

GC: There are two elements to that: the first is the app itself. The size did go up a little bit, 10 megabytes or 15 megabytes, which is the initial download. When you’re downloading the app, it takes a little bit longer.

What we were able to do was basically serve different assets to different devices. If you are on the iPad 1 or 2, you won’t get high-res images, because they wouldn’t mean anything to you. You couldn’t see them.

On the new iPad, the size does go up. An average edition that might have been 20 megabytes on an iPad 1 or 2, is now 30 or 35 megabytes on the new iPad. For some developers, I know they fumbled with that. We made a decision to be in the Apple Newsstand, and we get downloaded in the background. When you wake up in the morning, The Daily is there. From a consumer standpoint, the hope is that they don’t really notice, as it happened when you’re sleeping.

If you didn’t get your Newsstand update for whatever reason (your iPad was off, you were on an airplane, etc.), you would have to download the bigger book. The download isn’t double the size; if it took you two minutes before to download, it doesn’t take five now. It only takes two and half or three minutes.

FOLIO: How are you marketing the new app?

GC: We’re doing a couple of things. Apple featured us in the iTunes store among apps that have been optimized. We let our readers know: we did via ads in The Daily, we did it via email blast, we used our active social media presences on Twitter and Facebook. We’re not putting billboards on the side of the highway, but we’ve never really had to do that to begin with. Reviewers also helped: we were in a lot of early lists (like on Business Insider and TechCrunch) of apps you should check out on the new iPad. That’s the upside to spending time and effort to optimize.

FOLIO: Were there additional production costs to creating the new app?

GC: Do you mean emotional costs? We have an in-house production team of developers, so we didn’t hire anyone or spend additional dollars. We paid in a lot of time, blood, sweat and tears.

FOLIO: How has The Daily been doing since its debut in early 2011?

GC: We crossed over one million downloads, but the number people really want to know about is paid subscribers. We hit 100,000 paid subscribers recently. A sub cost $40 a year, or $1 a week, and we offer a free two-week trial period. We generally have 250,000 readers throughout a month period. We’re usually competing for the number one grossing news app slot in iTunes with The New York Times app.